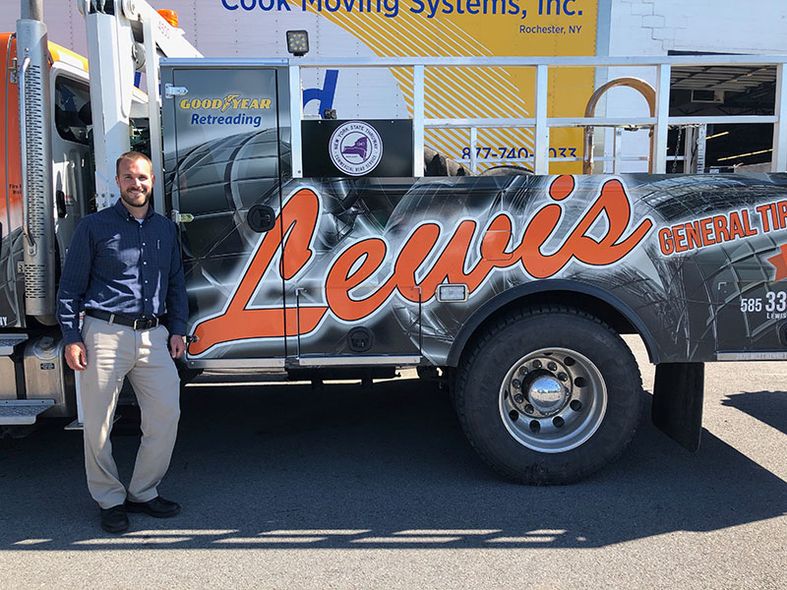 Tire Business photo by Don Detore
Craig Lewis poses next to one of his five mobile tire trucks. The owner of Lewis General Tires has big plans for the company. Within the next three to five years, he plans to move the retread shop to an affordable location in an industrial park and convert the vacated space into more retail/commercial space.
Share 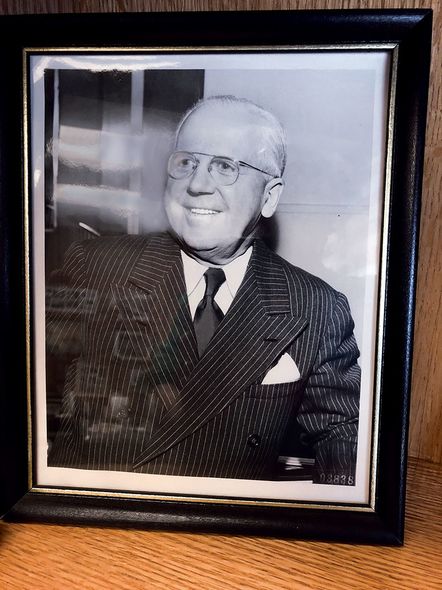 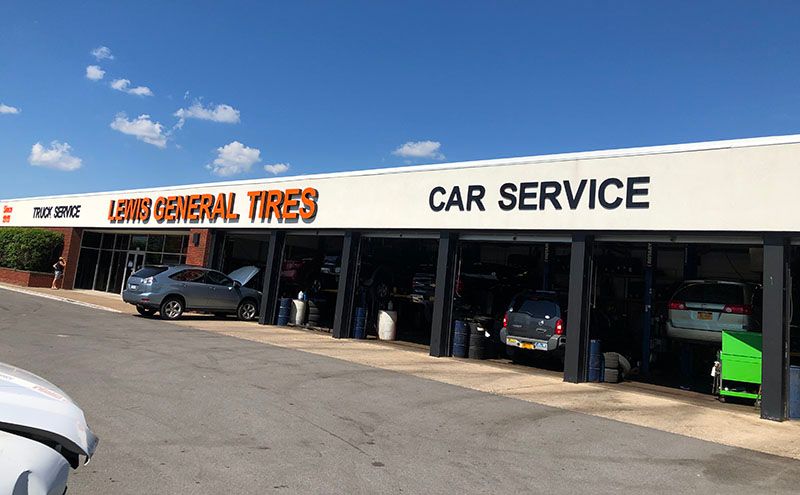 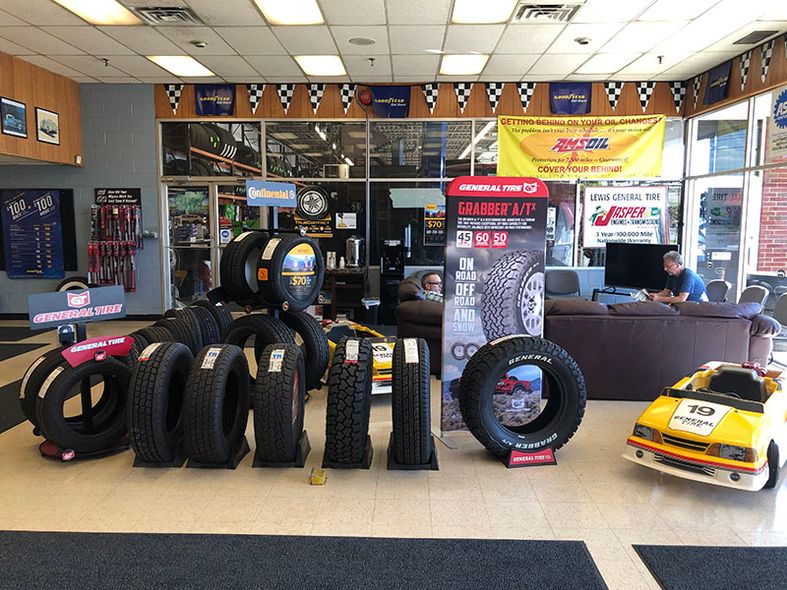 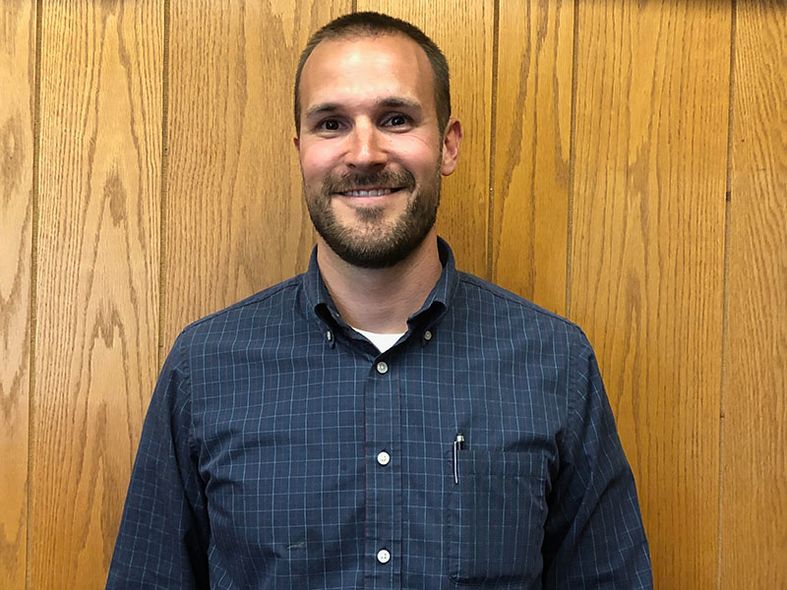 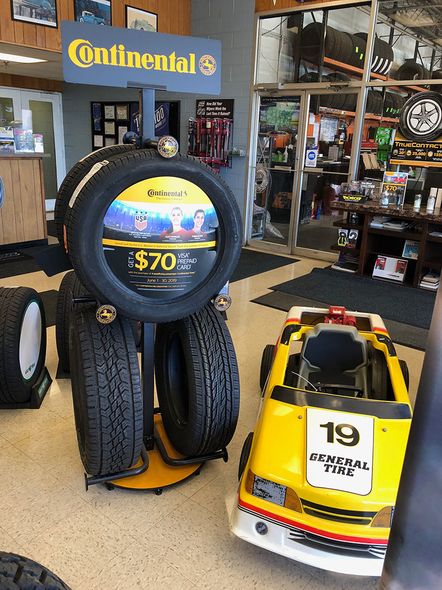 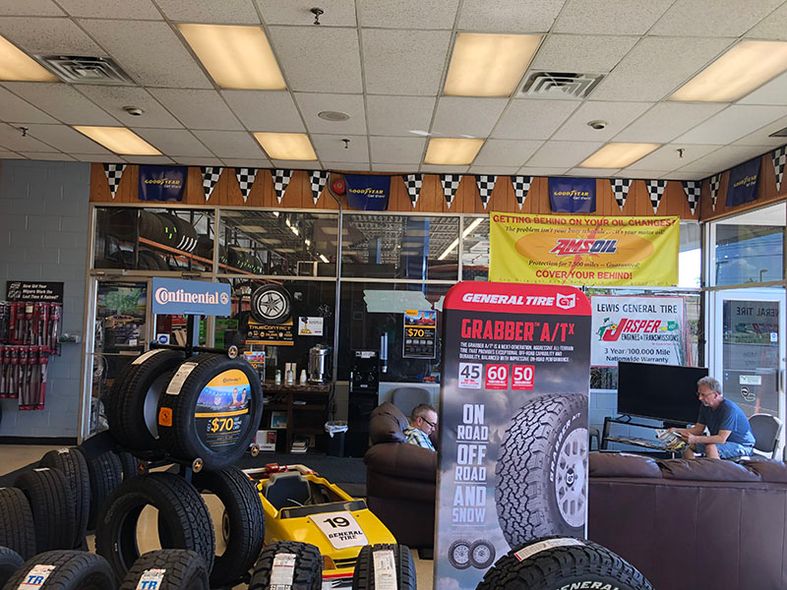 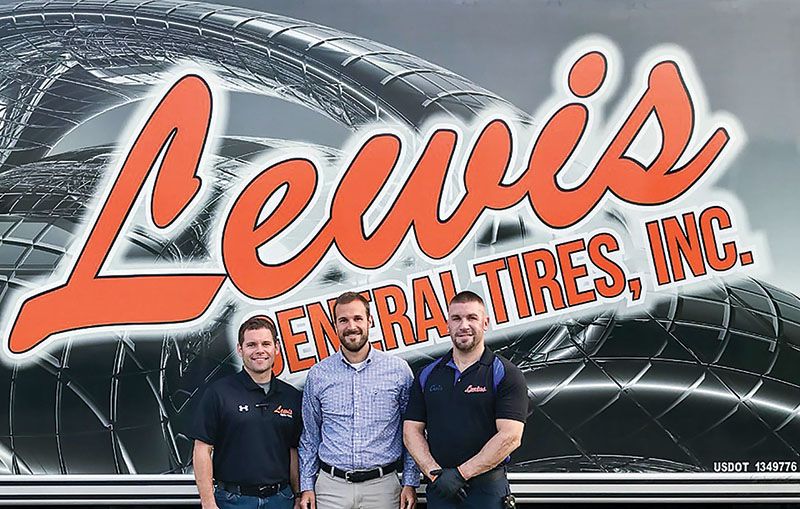 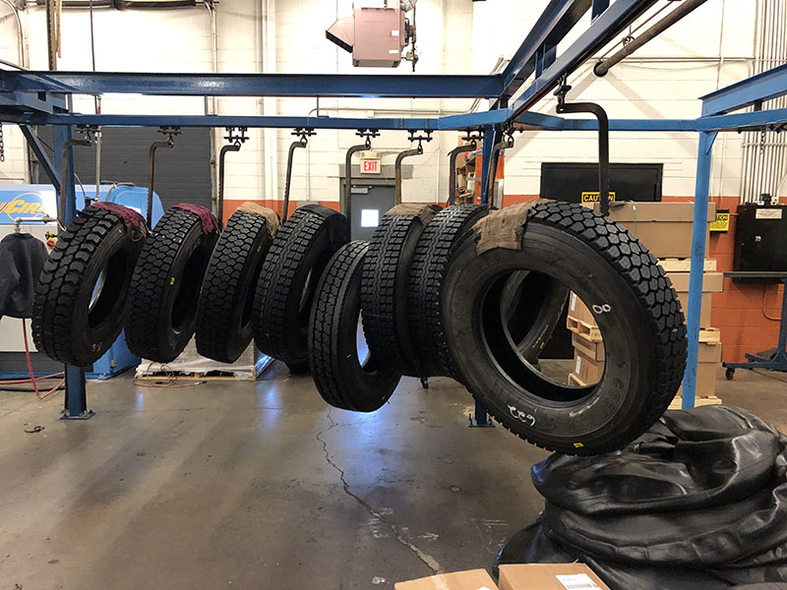 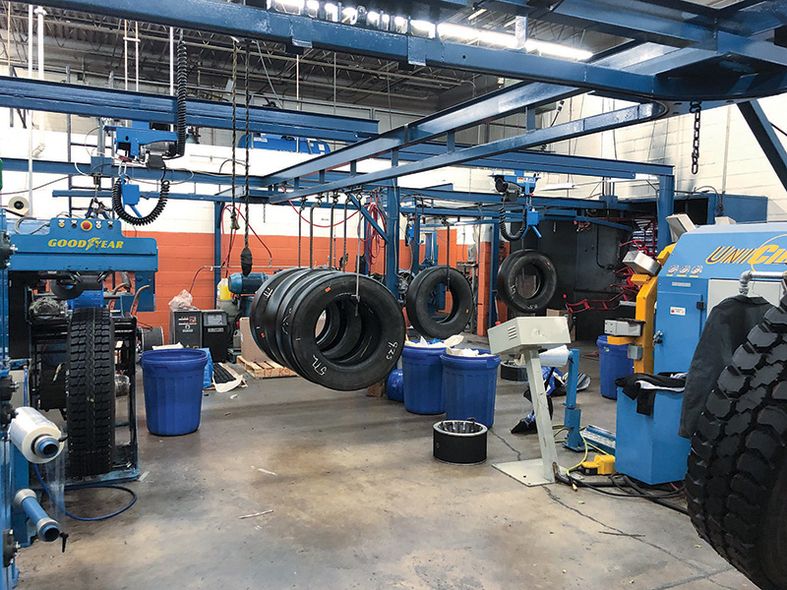 Tire Business photo by Don Detore
A look inside the Lewis General Tires retread shop, which is an authorized Goodyear dealer.
Share 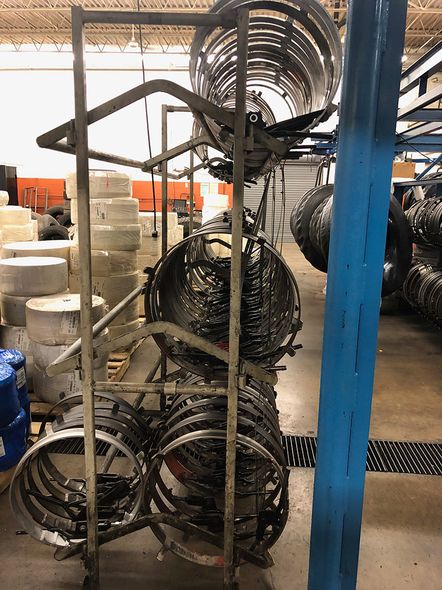 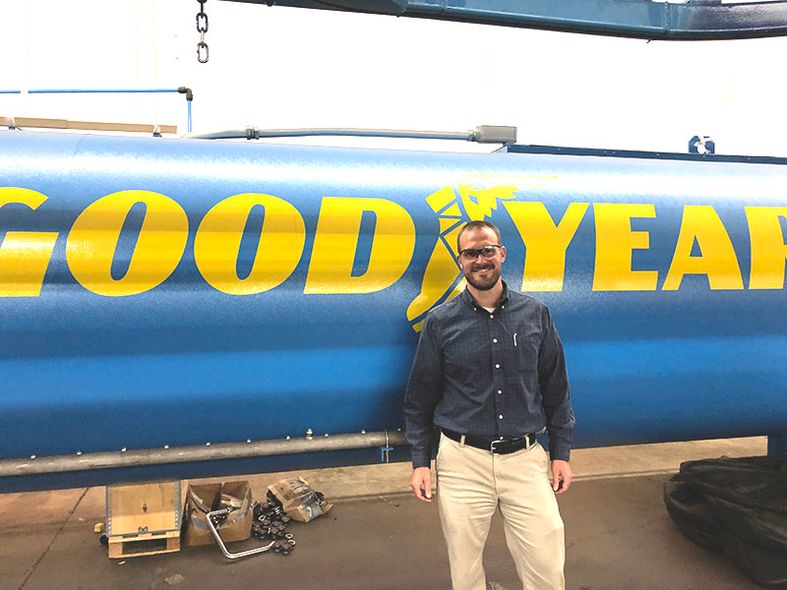 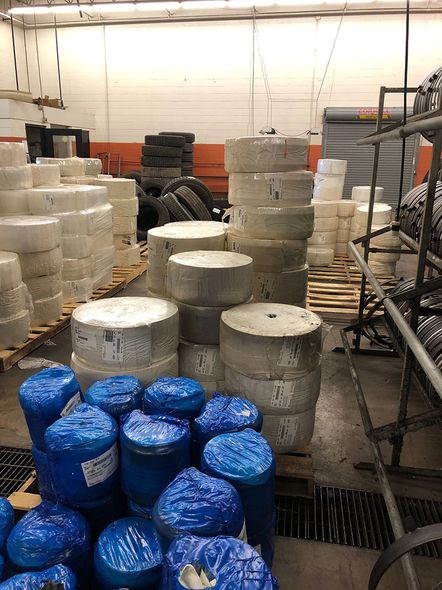 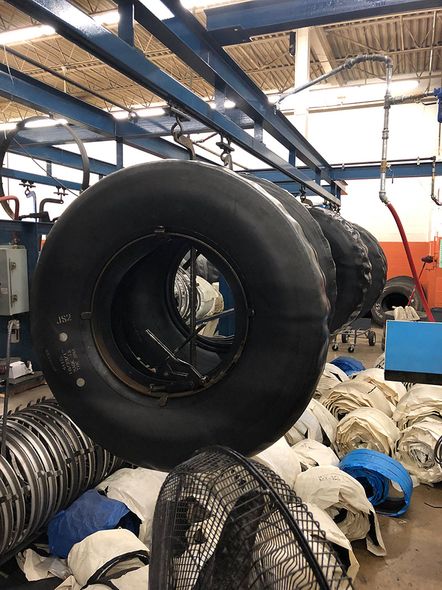 Tire Business photo by Don Detore
Lewis General Tires hopes to move its retread shop into a new facility in five years or so, according to owner Craig Lewis.
Share 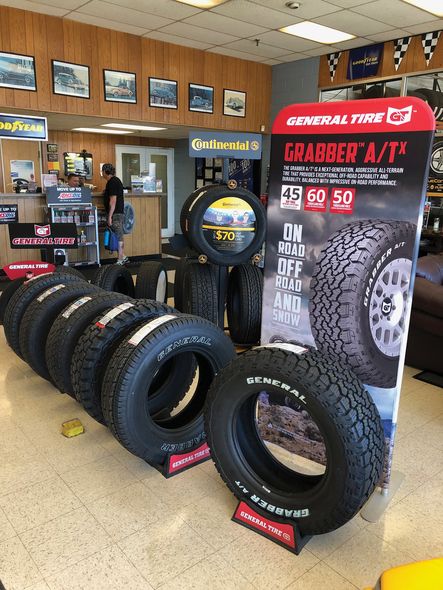 HENRIETTA, N.Y. — Just what is the secret to reaching a milestone few family-owned businesses achieve: A century of serving customers?

"A little bit of luck," Mr. Lewis said, reflecting on his dealership, Lewis General Tires Inc., the Rochester, N.Y.-based business that, for much of its 100 years in business, has served just about every customer there is: retail, commercial and retread.

"Every single generation, for whatever reason," Mr. Lewis said, "had more than one person who wanted to be involved in the business."

Luck, he said, is a factor, but he pinpointed one overriding reason for his dealership's longevity: Avoiding complacency.

"The question was hard as I know between my great-grandfather, grandfather, father and myself, we are different men with different abilities and faults," Mr. Lewis said. "We do not approach business in the same way despite our shared DNA."

The secret to success, he said, was understanding these words of wisdom, passed on from one generation to the next: Either you run the company, or the company runs you.

Mr. Lewis said he first was told that when he was young, in no position of authority, not really understanding their meaning. He required the wisdom encoded in the warning, he said.

"I understand it now to be a warning against complacency," Mr. Lewis said. "If you take your finger off the pulse and get too comfortable, you will soon lose control and become lost in the metaphorical wilderness.

"Individuals can become complacent when they get comfortable. More so, family businesses are plagued with overcomforted succeeding generations. Understanding this warning passed down to each generation is the reason we have not destroyed ourselves from within, which I believe is how most companies die."

It was anything but complacency that prompted Mr. Lewis' great-grandfather Leon to start his own business in his 20s. While working in Rochester at Hood Tire, he traveled to Akron to meet William O'Neil, a former Firestone franchise owner who had formed General Tire & Rubber Co. in 1915.

Mr. O'Neil, whose father owned a department store in Akron, convinced the elder Mr. Lewis to establish a General Tire Sales Co. in Rochester, securing financing from General as well as a local bank.

"He just went for it," Mr. Lewis said. "He was really an entrepreneur type of guy, a risk taker."

He operated the company himself until 1933, when the Great Depression began to take hold. He merged with a competitor, and the business was renamed Scanlon-Lewis General Tire.

A third partner was brought in, but when it became apparent that Leon would pass the company on to one of his three sons, Leon Jr., Alan or Richard Sr., the elder Mr. Lewis bought out his partners in 1954.

Richard Sr. had become the sole owner by the late 1960s. In 1969, Richard Lewis bought some farmland near an expressway and built the dealership's current location in Henrietta, relocating the business from Rochester. Leon died in 1975.

The business, meanwhile, continued to grow, and during the mid-1980s, the dealership operated three retail and two commercial locations. .

In April 2015, then-29-year old Craig Lewis, one of Richard Lewis Jr.'s four children, bought the business from his father, then 69. Today, Craig's brother, Chris Lewis, operates the retread business, while his brother-in-law, Tim McInerney, is a commercial account manager.

Tom Fanning, Continental Tire North America's vice president of sales and marketing for truck tires in North America, said longstanding partnership with Lewis General "shows the strength of the General Tire brand and product portfolio, and is a testament to the entrepreneurial character of the Lewis family, generation after generation."

"We've kind of tried to run the company itself as though it's part corporation, part family," Mr. Lewis said. "I think that's been part of our longevity."

The transitions between owners have been consistent in two regards: Each has had some issues, yet each family member, Mr. Lewis said, has kept the company first and worked through them.

Plus, he said, "You treat people like people, not numbers. I think most people who work here feel that we have their interests in mind."

At one point, Richard Lewis Jr. told his son, Craig, that he never would work in the business, in part because of the complications encountered during previous generations.

Once an opportunity for a job vanished in carpentry for Craig, his dad offered the then-16-year-old a job in the dealership in 2008, just as the latest recession began. The younger Mr. Lewis did everything from changing tires, to performing oil changes and changing brakes, to light-duty commercial work.

He even scrubbed toilets.

Although he went to college, graduating with a degree in business administration from the University of Albany, Mr. Lewis stayed loyal to the business.

"I stayed here because of the bonds that I formed with the people here," Mr. Lewis said. "I didn't feel like it was something where I could leave the company and leave the people here to what — To be sold to some other tire company?

"My strategy has been to take a few manufacturers that you can really work with and forsake the rest," Mr. Lewis said. "We really try to work the programs and maximize that. The associate programs have been a godsend to the independent tire dealer, at least to the ones of my size."

"Tire business is people business, and our dealers truly become part of the Continental family," Mr. Fanning said. "We offer programs and support to get them to the next level in their growth."

Looking to the future

When Mr. Lewis took over the business in 2015, it posted $7 million in revenue, he said. A year later, he signed a deal to become an authorized Goodyear retread shop, and Mr. Lewis credits that with helping his shop increase revenue to $9.6 million in 2018. The goal this year is $10 million.

The commercial division represents about 80% of that business, which includes the retread shop. In the three years since aligning with Goodyear, the retread business has grown from $1 million to $1.4 million in revenue, he said.

Within the next three to five years, Mr. Lewis has plans to move the retread shop to an affordable location in an industrial park and convert the vacated space into more retail/commercial space.

Along with that comes the goal of generating $14 million in revenue, which would mean the firm would have doubled in size under his leadership.

"The one thing I don't want to do is grow for the sake of growing," Mr. Lewis said. "What we do, I want to do it right, and I want to maintain the company that we are as we grow. If we lose the culture, there's no point in growing."

He sees growth potential in the commercial side, especially with Goodyear as a partner.

"On the commercial end, we try to spoil our customers with good service," Mr. Lewis said. "To us, that's the key. We believe our customers stay with us because of our service."

Mr. Lewis, with a child on the way, said his goal is to pass the dealership on to the next generation, whether that's his children or a nephew or niece.

"I know that I can't give up and sell," he said. "I have to see it through, which means I'm in this for the rest of my career, and I have an obligation to do everything I can to pass it on to a fifth generation."

Do you have an opinion about this story? Do you have some thoughts you'd like to share with our readers? Tire Business would love to hear from you. Email your letter to Editor Don Detore at [email protected]m.