Photo gallery: Nexen has ambitious goals as it continues to increase market share 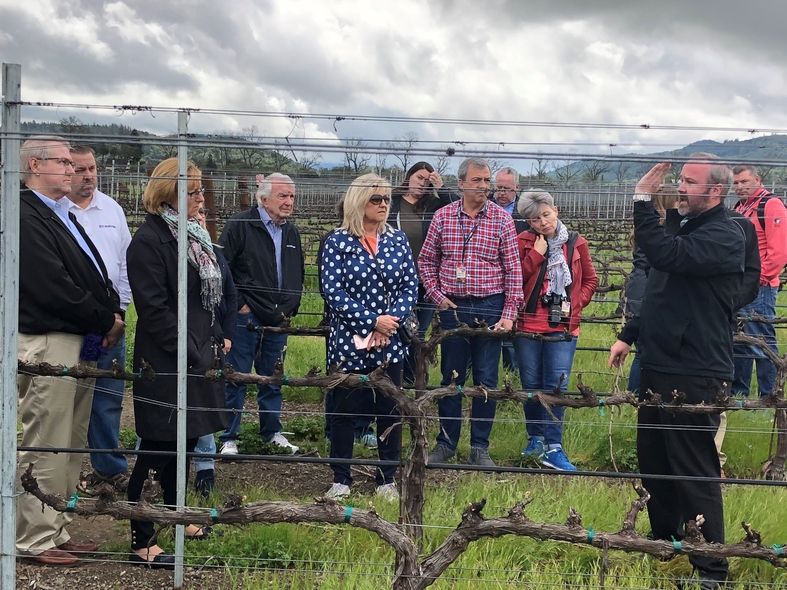 Michael J. Brown (far right) explains the grape-growing process to dealers during an activity at the Robert Mondavi Winery in Napa, Calif. The dealers were attending a Nexen Tire dealer appreciation event. 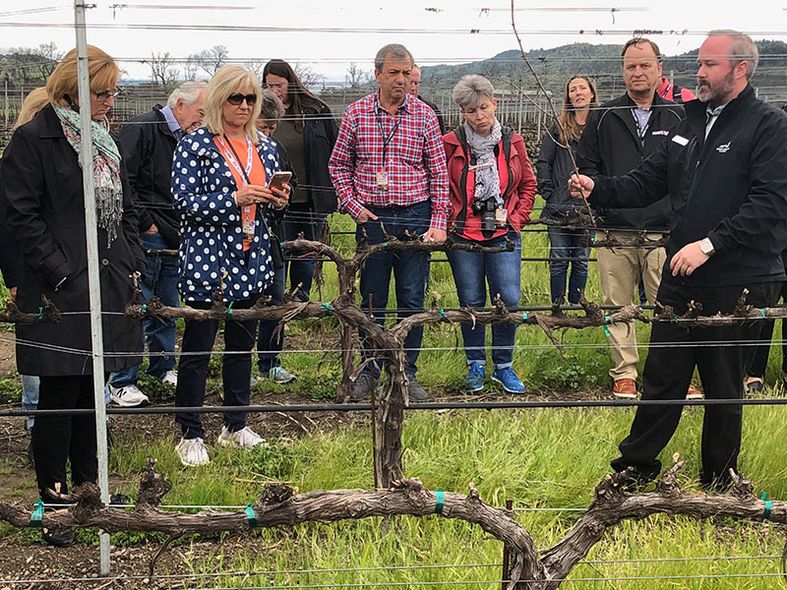 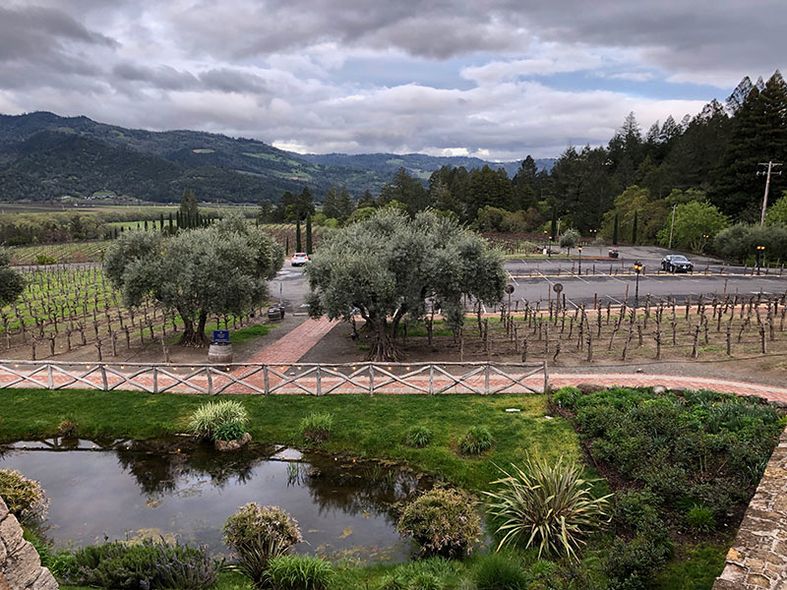 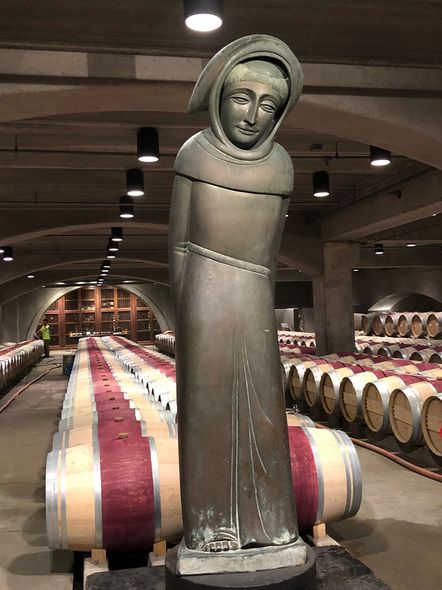 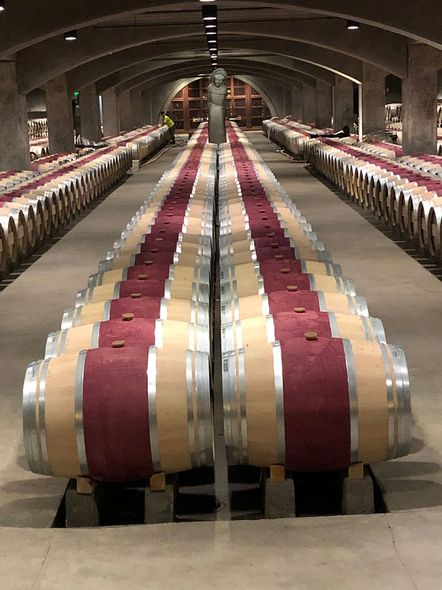 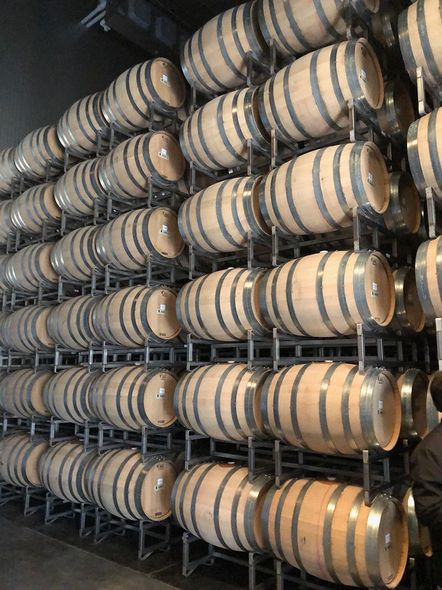 Tire Business photo by Don Detore
Wine is aged in barrels that sit in constant temperatures in rooms such as these at many wineries in Napa, Calif.
Share 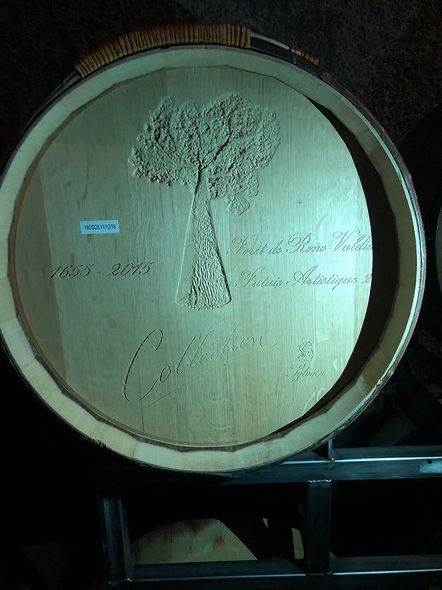 Tire Business photo by Don Detore
The wood used to make this barrel originated from France, dating back to 1665.
Share 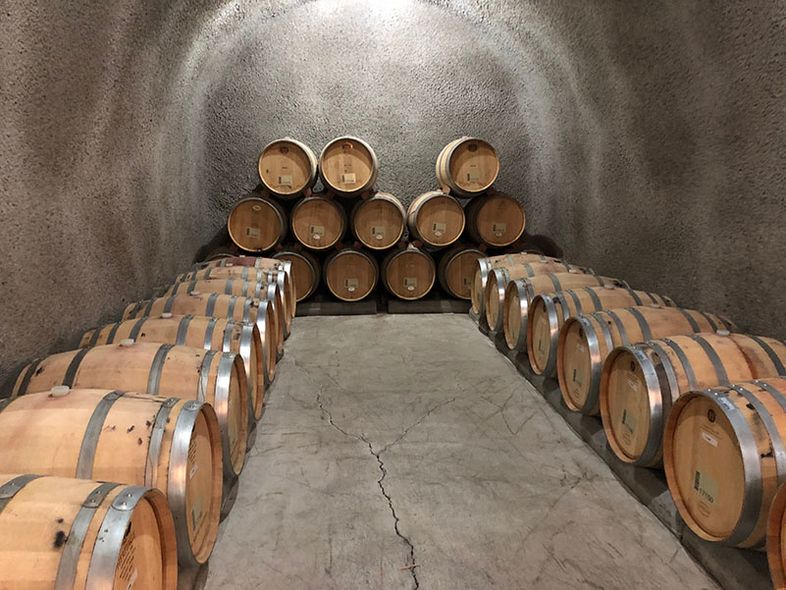 Tire Business photo by Don Detore
Wine is aged in barrels that sit in constant temperatures in tunnels such as these at many wineries in Napa, Calif.
Share 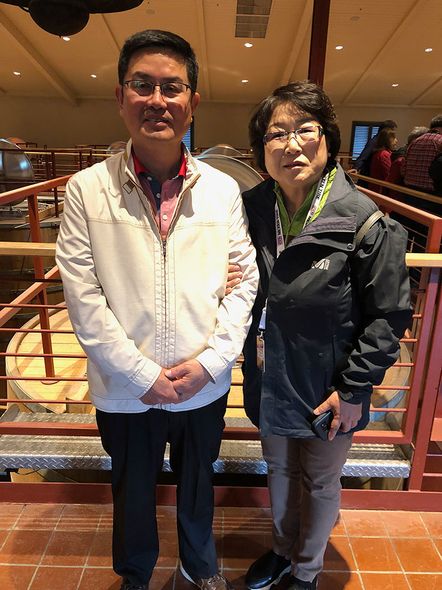 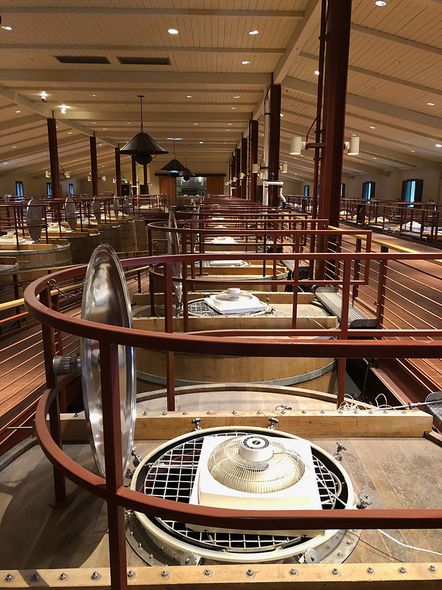 Tire Business photo by Don Detore
Wine is processed and and stored in these containers.
Share 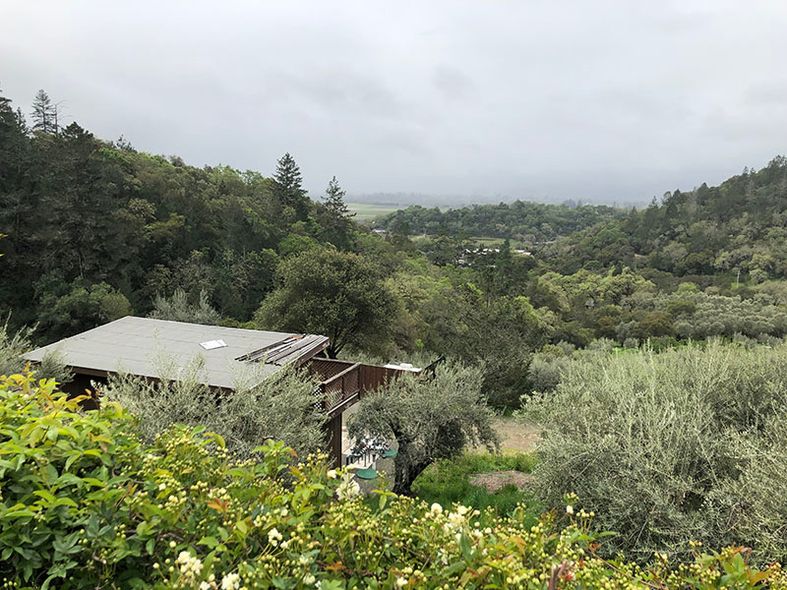 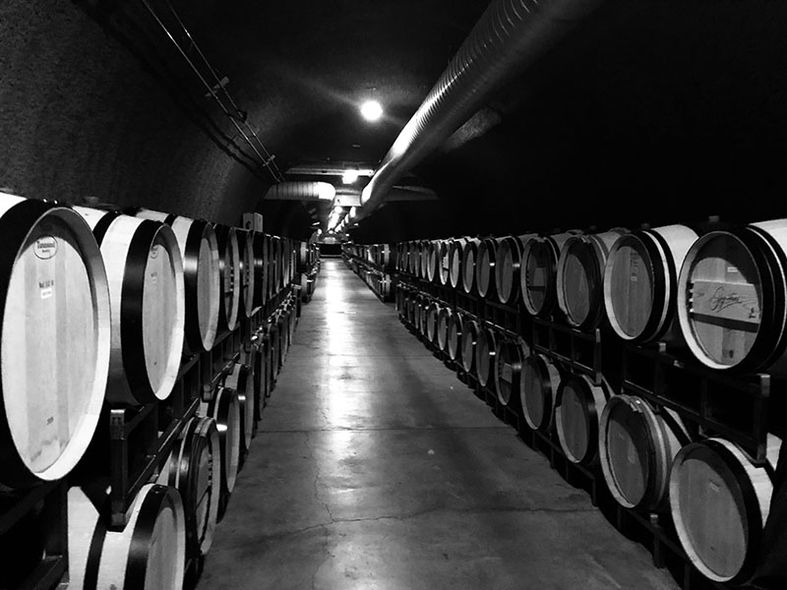 NAPA, Calif.—As mid-year approaches and the weather across North America heats up, the cold and flu season seems to be a fleeting memory.

It's much like the days when Nexen Tire America Inc. was prone to any industry or customer malady.

Today, the emphasis is on a balanced distribution network.

"We had some large customers in the past, that if they got a cold, we got a flu," Mr. Hagan said during an interview with Tire Business. "Now if they get a flu, we get a flu.

Nexen, he said, continues to post double-digit growth in sales — a trend that has continued in the first quarter of 2019 — and has set a goal to secure 3.25 percent market share in the U.S. by 2020. The tire maker has its sights set on cracking the Top 10 in global sales by 2025.

Mr. Hagan shared that vision with 26 dealers — including two dozen direct tire dealers and two associate dealers — and their companions — during a five-day dealer appreciation event, held in April in California's Napa Valley.

He hoped the dealers left wine country not only with a greater affinity for fine wines — it seems as if every parcel of land in the valley not part of a winery or business grows some variety of grapes — but also with a clear understanding of where the company is and where it intends to be.

"Hopefully they leave here with what they came with: Confidence in Nexen, confidence in the direction where we are going and confidence we will take care of them through thick and thin, no matter what," said Mr. Hagan, who has been part of the tire industry for more than three decades.

"Our No. 1 goal is to try and have a consistent relationship, but also a supportive one. A lot of these dealers, if not all of them, come to the table knowing that you throw the problem on the table, you work the problem. Sometimes you win, sometimes you lose, but at the end of the day, we're here for each other to be successful."

When Mr. Hagan joined Nexen at the end of 2016 — after a career that included stops at Linglong Tire Co. Ltd., Kumho Tire Co. Inc., Toyo Tire & Rubber Co. Ltd. and Pirelli Tire L.L.C. — he said he found some complacency and a sense of entitlement.

"We pretty much switched it out where everyone is held accountable for everything they do," Mr. Hagan said. "It's instilled in their mind hopefully that accountability is the key to everything,"

Today, he said, employees who provide sales forecasts must stand by those numbers. They review data daily, monitoring what was delivered and what wasn't.

"The sales team is always trying to learn from yesterday," he said. "We've done a very good job of learning from the past to help build our future."

Most recently, he hired another industry veteran, Megan Wentz, as marketing manager.

"We've talked over and over about creating some continuity, consistency and longevity, with our planning," Ms. Wentz said. "The big priority with me is making sure this plan is for the next five or seven years and beyond."

Mr. Hagan attributed Nexen's resurgence to a variety of factors.

The first is its strong products.

Mr. Hagan told dealers that since 2000, Nexen has sold 395 million units without a recall.

The Roadian MTX, launched at the 2017 Specialty Equipment Market Association (SEMA) Show in Las Vegas, can "run with the big dogs," Mr. Hagan said, referring to the Tier 1 manufacturers.

"We priced it competitively with the value that speaks for itself," he said. "But like any tire manufacturer, when you introduce a new line, you want to go from zero to a million. With this segment, we didn't take this approach. We said, let's get out to dealers ... so dealers have to speak on the tire."

The Rodian AT Pro RA8 also was designed to go after the Tier 1s, Mr. Hagan said, at a lower price point. "It just keeps on growing double digits every year," he said. "It's been very good for us."

Another key factor is the company's investments, being made both in North America and abroad.

In the last year, Nexen opened a $1 billion tire plant in Zatec, Czech Republic, that will supply Europe and other areas abroad.

While the plant won't produce units for North America, Mr. Hagan said it would free up capacity at Nexen's two plants in South Korea. And that's important, he said, to help maintain the company's fill rates, which he said are north of 95 percent. In fact, he said the company only recently initiated a back-order system.

"There is no need to have a system before," Mr. Hagan said. "I could argue there is no need now. We have two warehouses, and if we can have a back-order system that can help us and get as close to 100 percent as possible, it makes us better in the long run."

Nexen has inaugurated a 613,000- sq.-ft. central research center in Seoul that will become the company's hub for its R&D centers in the U.S., Europe and China.

It also is putting the finishing touches on a North American R&D center in Richfield, Ohio, just north of Akron.

The tech centers, he said, are helping to boost Nexen's burgeoning original equipment business, which increased to 3.5 million units in 2018 from 600,000 in 2013.

Nexen has fitments with Hyundai Motor Co., Kia Motors Corp., Honda Motor Co. and Fiat Chrysler Automobiles in North America and in Europe with, among others, Volkswagen A.G. , Audi A.G., Mercedes-Benz A.G. and Porsche A.G. In fact, the tire maker said it has fitments with 152 total models globally, including 32 in the U.S.

Finally, Nexen is betting on its Associate Dealer program.

Mr. Hagan said the program took shape in 2008 and is beginning to take off this year.

"We created a strong, simplistic program," he said. "... It's consistent, it's fair, and it enables growth."

Mr. Hagan said the software for Nexen's Associate Dealer program is built to include direct-to-consumers sales. But, he said, that won't happen.

"We have dealers. We have distribution," he said. "We support that. They're the ones that should be (selling tires)."

Mr. Hagan said it's extremely important for Nexen to keep the lines of communication open between the tire maker and its dealers. He said the goal is to respond to any issue within 24 hours.

He likened the relationship to a marriage.

"Throw the problem on the table, let's look at it and find a solution," he said. "Let's be big, and if there is no solution, let's move on. We go in with this attitude: We've always found a solution."

Mr. Hagen said Nexen once was considered a low Tier 2 or Tier 3 product. Today, he asserts, it remains a strong Tier 2, a diamond in the rough.