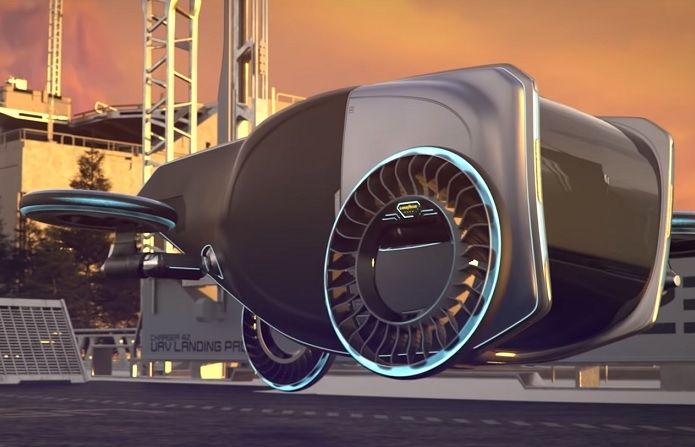 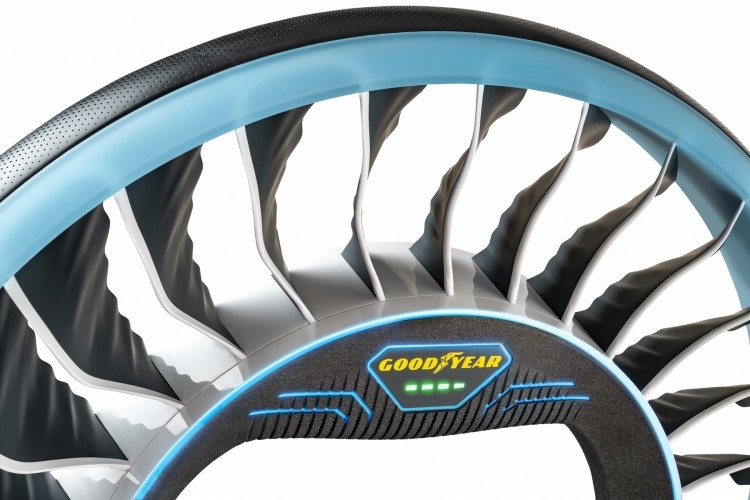 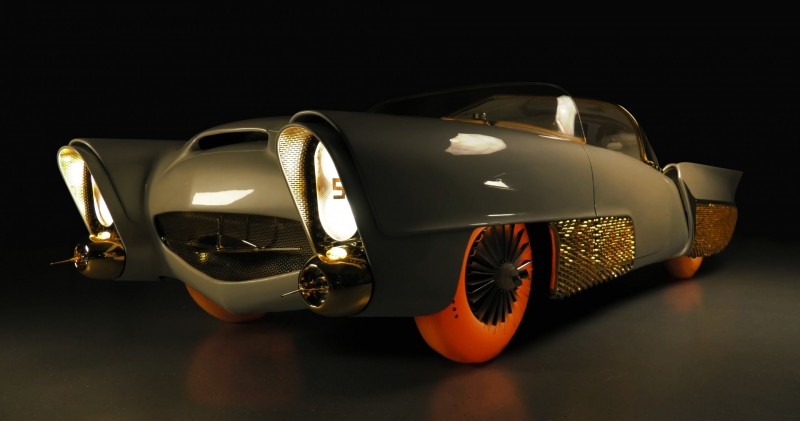 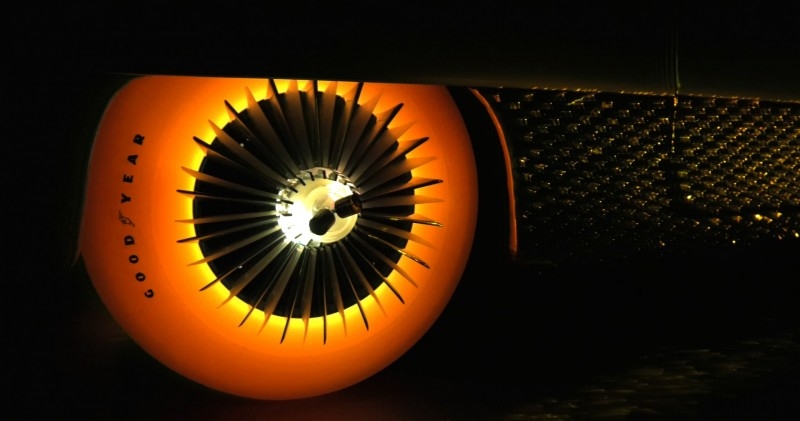 The tires were developed by Goodyear using Neothane, a translucent form of synthetic rubber, and contained internal lighting, which allowed them to glow.
Share 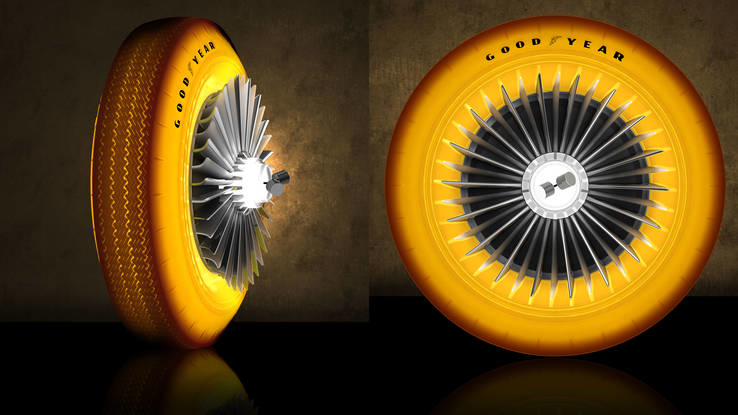 Goodyear produced a new set of its light-up Neothene tires, with one catch: Because they're solid, they're super heavy -- which means the car can only be driven at slow speeds in a controlled environment.
Share 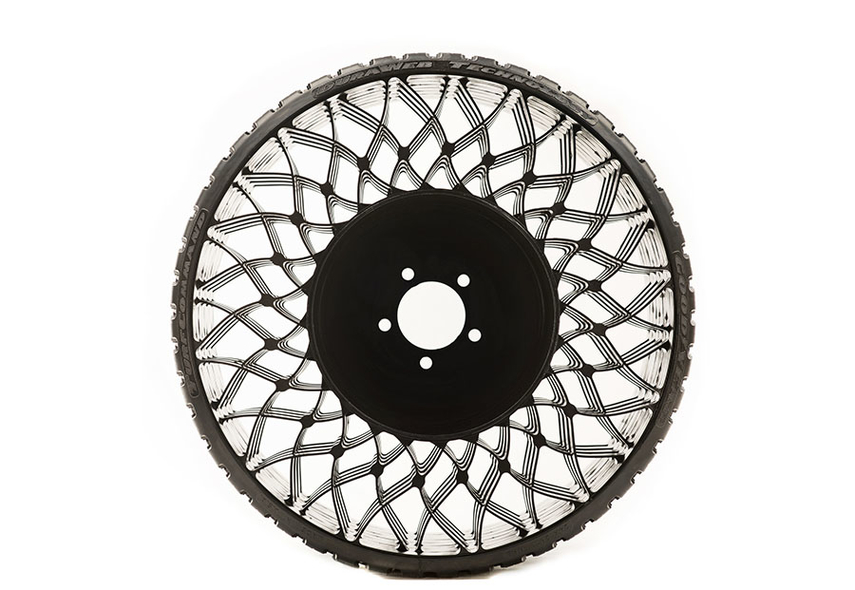 GENEVA, Switzerland — Goodyear went both retro and futuristic at the 2019 Geneva International Motor Show to showcase the company's technical prowess.

On the retro side, Goodyear displayed the recently restored Golden Sahara II, an "iconic" custom car of the late 1950s that incorporated a number of sensor-based autonomous driving features and rolled on a set of translucent Goodyear tires that were illuminated from the inside.

Based on a 1953 Lincoln Capri and developed by Jim Street and legendary custom car designer George Barris, the Golden Sahara II was a platform for testing electronics systems, Goodyear said, including an aircraft-inspired control lever for acceleration, braking and steering and an automatic braking system that used sensors to detect potential objects in the car's path.

The car's rotational-molded tires were developed by Goodyear using Neothane, a translucent form of synthetic rubber, and contained internal lighting, which allowed them to glow.

The Golden Sahara II surfaced last year and was snapped up by collector Larry Klairmont, whose Klairmont Kollections then restored it to its original luster.

On the futuristic side, Goodyear presented a theoretical non-pneumatic integrated tire/wheel concept that would double as a propeller to allow a lightweight autonomous vehicle to transition from road-going to airborne, even while on the move.

The Goodyear Aero concept, according to Chris Helsel, chief technology officer, is in alignment with new concepts by mobility companies that are "looking to the sky" to respond to increasing transport challenges.

The Aero vehicle is a multimodal tilt-rotor concept, Goodyear said, whose tire/wheel units would serve as a drive train to transfer and absorb forces to and from the road in a traditional vertical orientation and an aircraft propulsion system to provide lift in a horizontal orientation.

The Aero tire/wheel units would be attached to the vehicle and driven by a magnetic force, which would usefrictionless propulsion for both driving and flying, Goodyear said.

The tire/wheel unit, according to Goodyear, "is flexible enough to dampen shocks when driving on the road, and strong enough to rotate at the high speeds necessary for the rotors to create vertical lift."

Goodyear did not provide details as to what materials would be used for the non-pneumatic structure's spokes, which would have to carry the weight of the vehicle and act as fan blades to provide lift when the tire/wheel unit is tilted.

A video of the concept shows the vehicle balancing on two of the tire/wheel units (front left/right rear, for example) during takeoff and landing procedures.

Goodyear did not provide details as to the Aero vehicle's weight or amount of lift necessary to get such a vehicle airborne.

Light-based, fiber-optic sensors are also used in the tire/wheel unit to monitor road conditions, tread wear and the structural integrity of the unit itself. An artificial intelligence processor is added to combine the tire/wheel data with information from vehicle-to-vehicle and vehicle-to-infrastructure communication.

And more down to earth, Goodyear also showed a non-pneumatic tire/wheel structure called "DuraWeb" that it's proposing for use on the Olli eight-passenger autonomous shuttle vehicles, which are capable of operating at speeds up to 25 mph with a range of up to 40 miles, depending on load.

The Olli is a development of with Local Motors Inc., a Chandler, Ariz.-based "ground mobility" company. Goodyear recently struck an exclusive deal with Local Motors to supply the Olli shuttles with pneumatic tires — street-going models which it declined to identify — with an eye toward collecting data on the operational and maintenance needs of tires fitted on driverless vehicles.

The DuraWeb shown in Geneva appears to be a further development of a DuraWeb industrial tire/wheel unit that debuted in 2017 on a Bad Boy Mowers Inc. zero-turn mower.

Developed at the Goodyear's Akron Innovation Center, that DuraWeb was described as having a thermoplastic connecting structure that provides both stiffness and flexibility to carry heavy loads and maintain a smooth ride while protecting turf.