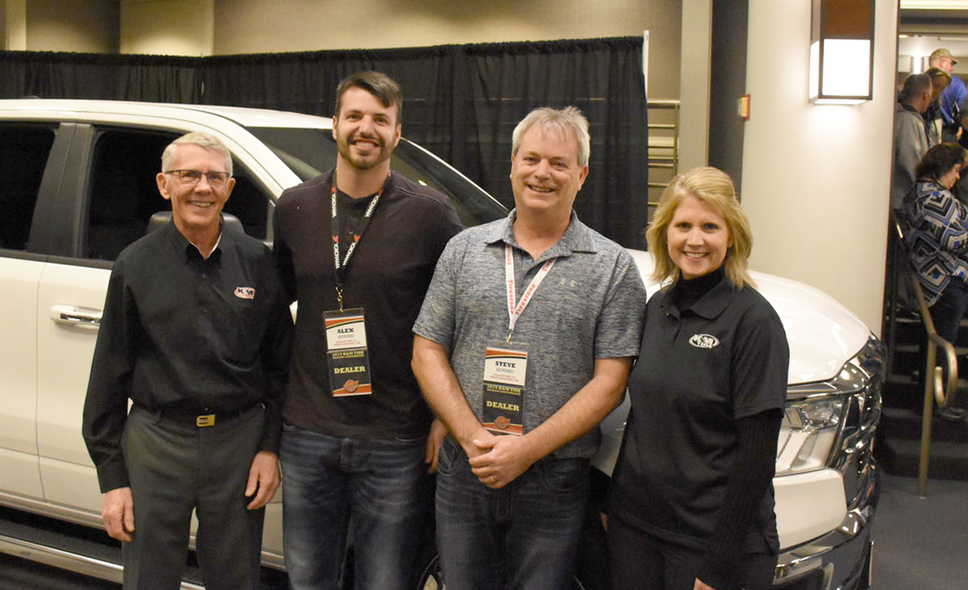 Ricky and Cindy of Madison County Tires pose for a photo with a check from Falken.
Share 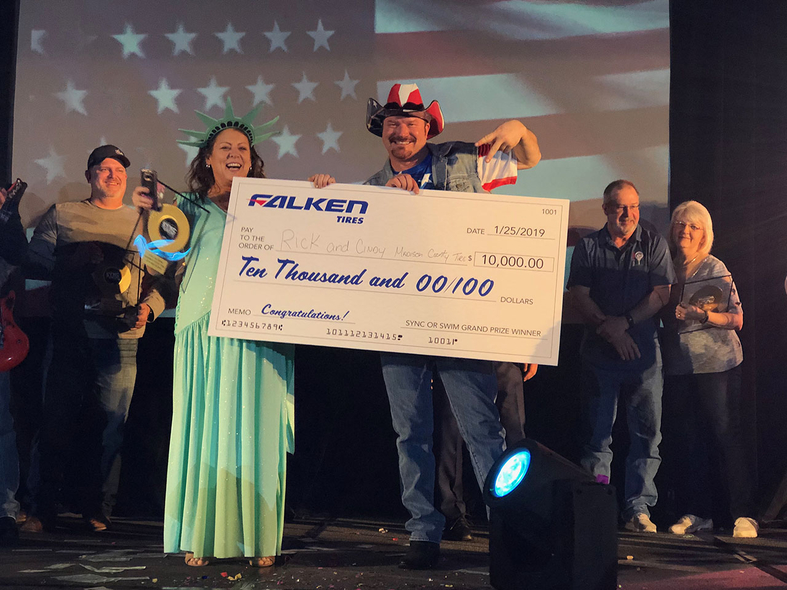 Cindy and Ricky of Madison County Tires pose for a photo with a check from Falken.
Share 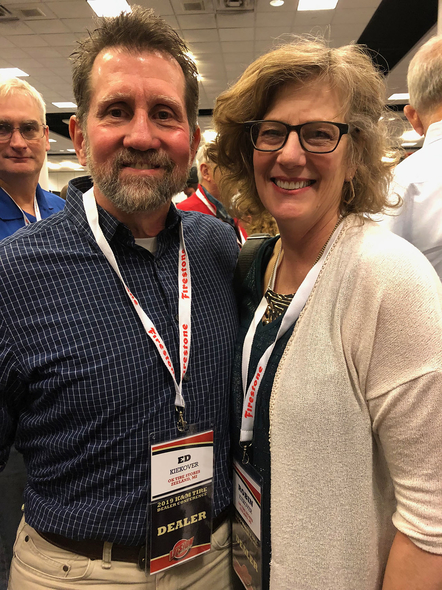 Ed and Robin Kiekover pose for a photo.
Share 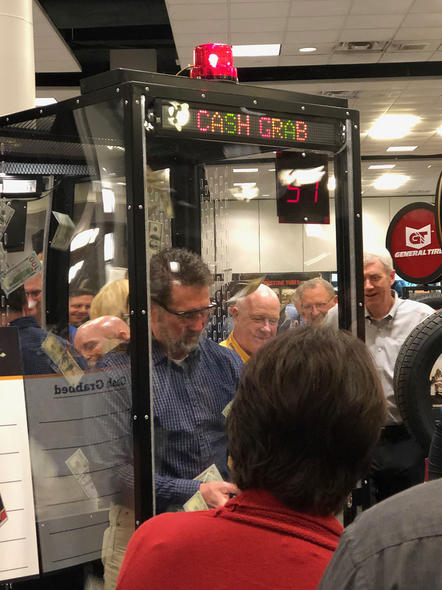 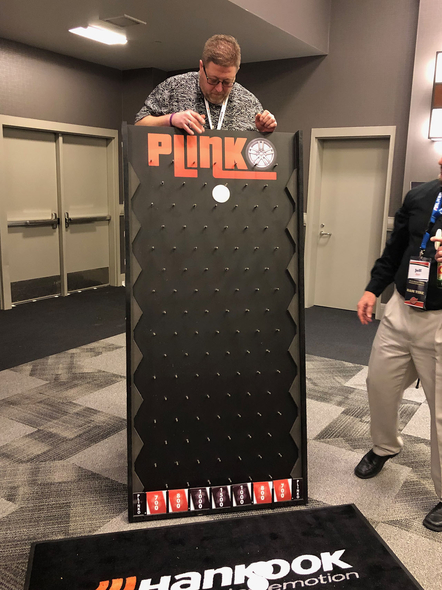 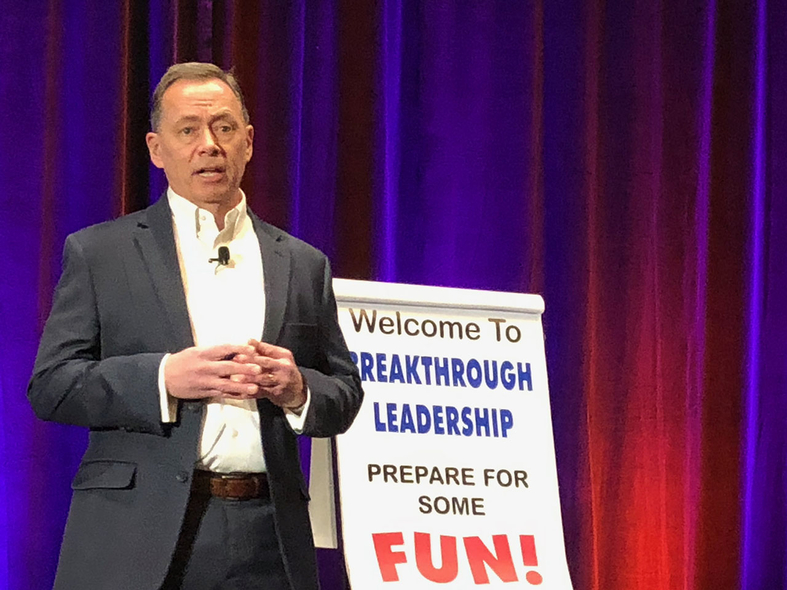 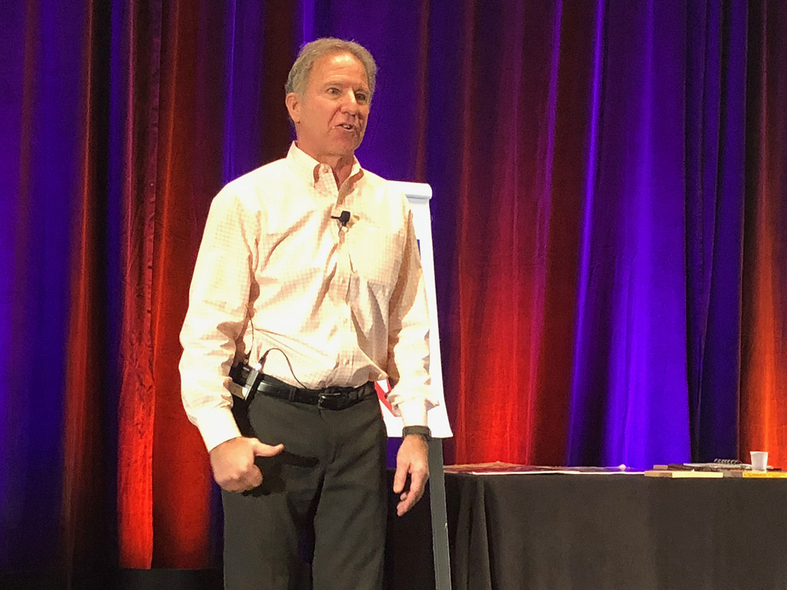 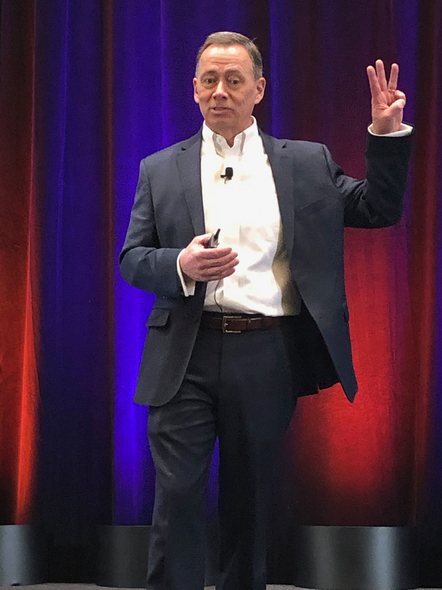 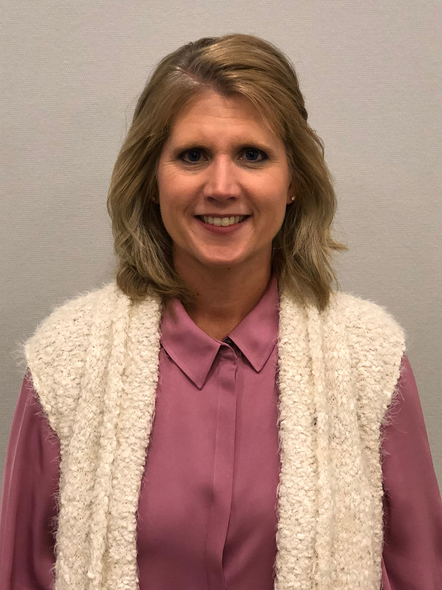 DALLAS — A year before celebrating its 50th anniversary, K&M Tire Inc. brought its network of dealers to a state where everything seems to be bigger.

And that seemed appropriate for the Delphos, Ohio-based tire distributor, which continued to grow and expand over the last 12 months.

Buoyed by a stronger-than-usual fourth quarter, K&M just completed a year in which it registered a nearly 15-percent sales growth, marking the fifth-straight year of double-digit growth, according to Cheryl Gossard, who recently passed her first year as president of the company.

Around 1,040 people, representing 500 different dealer locations as well as 45 vendors, descended upon Big D for K&M's 2019 Dealer Conference, held Jan. 24-25 at the Hyatt Regency. The annual event featured five seminars, a two-day trade show and host of other events — including a "Sync or Swim" lip-sync competition — designed to help dealers succeed and have fun during the time away from their shop.

"We want (dealers) to go home with just a little bit of information, some more connections, maybe some ideas that they can implement to help make their business more successful," Ms. Gossard said.

The networking, she said, allows dealers to reach out "to other people that are having some of the same struggles that they're having, but maybe they're several states away — working with them trying to figure out what works best for them, and maybe it will work for them."

Ms. Gossard said the moves came as a surprise.

"We weren't real sure what to think about it," she said. "We just tried to listen to (their customers), listen to what they had they say and how they see it, and just take it day by day and see what's going to happen.

'We try not to get too excited, when you don't know for sure how it's going to affect you."

A few employees on the sales side, she said, voiced some concerns about the disruptions, but as a whole, she credited the moves for the boost in K&M sales.

"We were looking at it as an opportunity for K&M," she said.

"What other people are going to do, there's nothing we can control or do about it. We try to keep our focus on K&M and make sure (customers) know what we have to offer."

Meanwhile, K&M continued to roll on. Among its 2018 highlights:

Ms. Gossard said the three newest warehouses (two in South Dakota, one in Texas) represent an investment of more than $10 million.

"We are dedicated to getting better, work tougher and harder to help you grow your business," Greg Ring, K&M's director of training and development, told dealers.

"All success in business greatly depends on relationships," Mr. Ring said. "At K&M we feel fortunate that we have relationships with the absolute best of the best — the best products, the greatest technology and the best vendor/supplier partnership in the industry."

Mr. Ring gave dealers a brief overview of the company during the opening session. He said K&M, which has 2.4 million square feet of warehouse space, has worked hard to increase its inventory "to stock tires you want."

According to Mr. Ring, in the year 2000, 267 SKUs accounted for 80-percent market coverage. Today, that number has risen to 625 SKUS for the same coverage.

Ms. Gossard said the company will key on three aspects going into 2019.

The first is to identify and fix potential problems before they become apparent to customers.

"Our goal to fix the problem before (customers) complain," she said. "We want to be able to see it's a problem and fix it. Once they complain, they are already upset about it."

She said the e-log system installed in trucks is one example of that, helping K&M to track delivery times and either adjust or add routes according. K&M drivers log 65,000 per day.

Another K&M focus is evaluating opportunities for more growth and pursuing them if they make sense. That approach was integral in K&M's late 2017 acquisition of MotoStar Tire & Auto Inc., which had warehouses in Maine, New Hampshire and New York.

"We're just always interested in continuing to get more of the market share in our existing area," she said, "and as opportunities come up, we look at them and decide if it's a good fit for us or not."

And she said thirdly, the company will work on adding new routes and more positions to serve and support those routes.

"We continue to focus on training and developing our people, Ms. Gossard said. "We continue to look at doing a better job at hiring, so we're hiring the right people and making sure they're in the right positions so we can capitalize on their strengths." We want to help our dealers be successful, because we know if they win, tehn we win."

The biggest challenge, she said, is to ensure that her team doesn't get tunnel vision and instead focuses on things that ensure long-term success.

"We have to look at the big picture, and we have to look for the future," she said. "It's easy to put a band-aid on something today. That fixes the problem today, but you're not fixing the root cause. That's what we really try to focus on. And it's hard. A lot of times, you have to step back to see it.

"We want to help our dealers be successful, because we know if they win, then we win."

Ms. Gossard's father, CEO Ken Langhals, founded the company 49 years ago in a two-bay location in Ottoville, Ohio. Next year, the group plans to celebrate with a bash in nearby Columbus.

"I feel every year our team at K&M continues to get stronger," she said. "We have never been more prepared and never had a better team than the one we have now. Everybody there … is focused on the future and doing things the right way for the right reasons. I feel like we're going to have a very successful 2019."