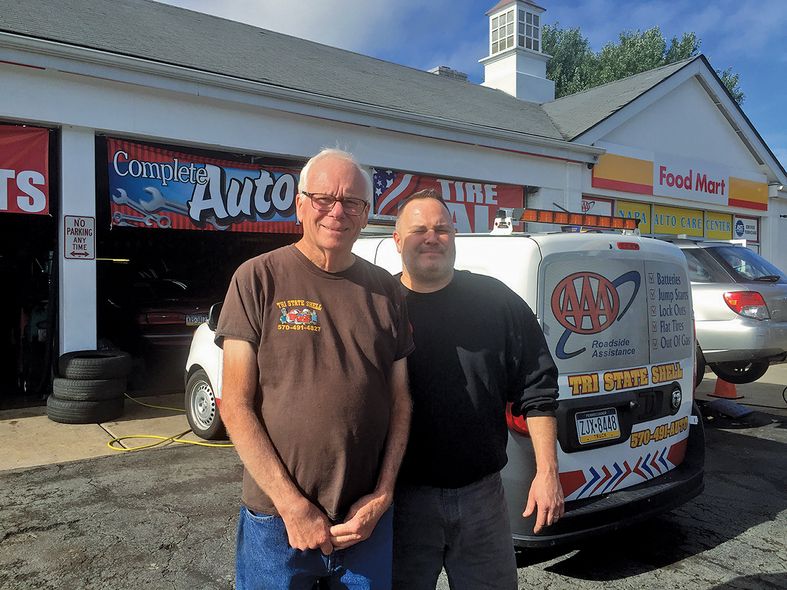 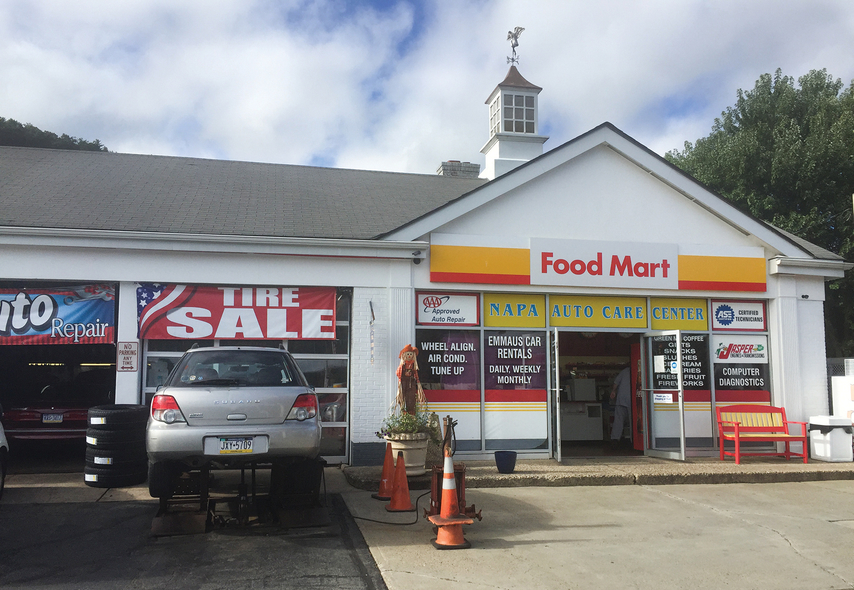 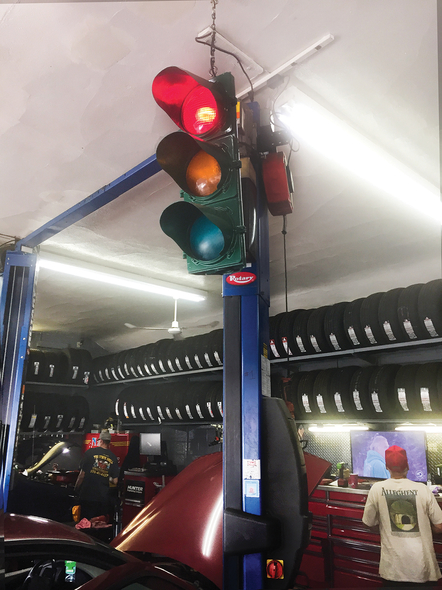 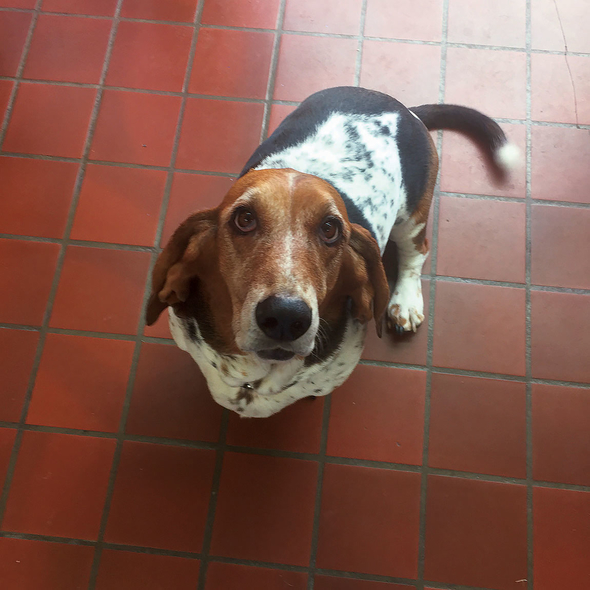 Tire Business photo by Dave Zielasko
Sadie, Les Strickler's basset hound, comes to work with him at Tri State Shell. So does Lady Bulova, a Rottweiler, which is Jeff Strickler's dog.
Share 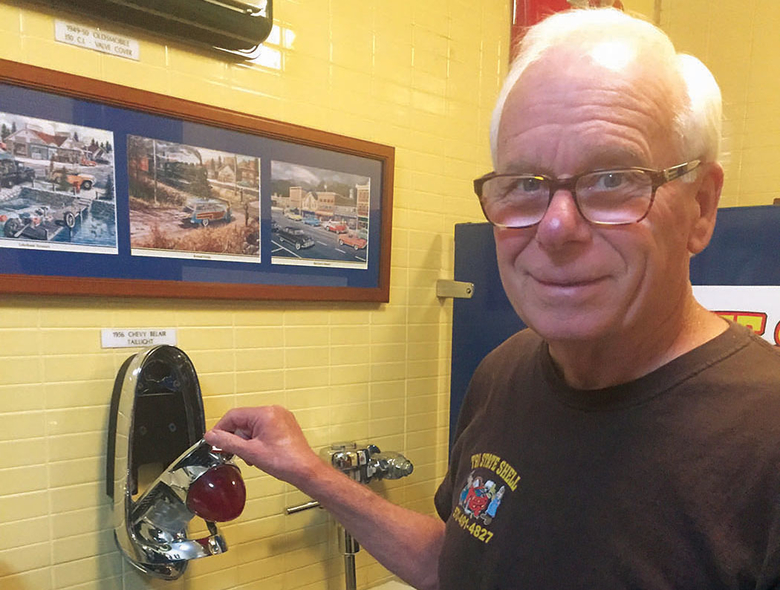 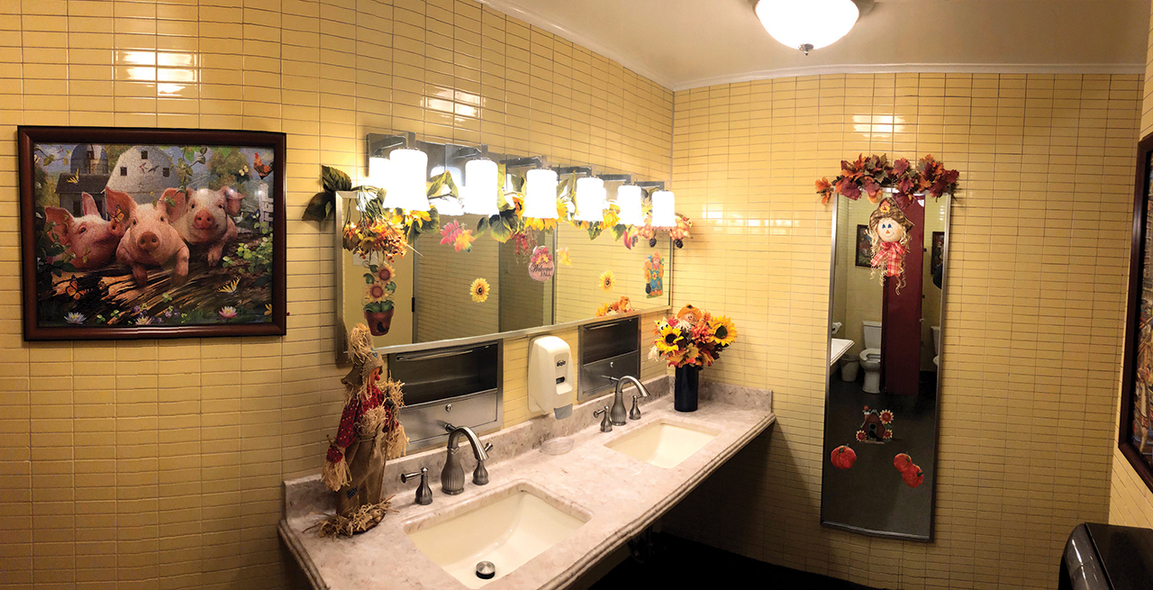 MATAMORAS, Pa. — "Our business starts all the way out by the curb."

That's one of the lessons Les Strickler passed down to his son Jeff, who now owns the full-service gas station, towing service and tire shop his father ran for more than 40 years, located just off the last exit on I-84 East in Pennsylvania.

"A lot of people forget that," Les said. "They never clean up. They never do anything. Your business starts from the curb, and it has to look professional from the outside, from the curb all the way in."

It doesn't take long to see that this philosophy has permeated Tri State Shell in Matamoras. Walk into the small convenience store located next to the three service bays, and the area is spotless.

Look closer and you'll see a collection of Danbury Mint 1/24-scale automobiles displayed on a shelf, historical clocks from oil companies mounted on walls as well as signs from companies such as Goodyear and Sinclair.

And there's not a speck of dust anywhere.

Peek into the service bays and you'll find a traffic stoplight hanging from the ceiling with the lights — red, orange and green — repetitively going through their sequences as technicians work on vehicles below.

It's another reminder this is not your usual service station.

But to really appreciate that you've entered a unique facility, you have to step into the restrooms. They are antiseptically clean, both men's and women's, like you might find in a fine restaurant or hotel.

Not fancy, mind you, just pleasant, clean and tastefully decorated with framed puzzles, put together by Les, in the ladies' room, and nostalgic pictures from "America Remembered" calendars by artist Ken Zella in the men's.

The men's room features one of Les' prized possessions, a 1956 Chevy Belair taillight mounted on the wall. Open it and you'll find where owners at one time filled these vehicles with gas.

The interesting memorabilia, which Les has collected and showcased over the years, is one reason for its success. Cleanliness is another.

Jeff, 46, bought the service station from his father four years ago, after working there since he was a teenager. He literally grew up in the business. His parents took him to work each day as a baby, keeping him in a crib in the office.

He said he knows Tri State Shell Tires make up about 10 percent of sales, the Stricklers said, with Hercules the top-selling brand.

The single location business is family-run, with Les, 71, working three days a week but no longer on the payroll. His wife Jane helps out, and Jeff's sister Jennifer Lemin runs the towing operation. The facility has 10 employees including four ASE-certified technicians, including Jeff.

Les and Jane started the business in 1972 when Les was 24, purchasing what was then a rental Sunoco gas station. It was a time when the oil companies were selling many of their outlets due to government pressure over monopolies.

Les had been running his father's service station in New Jersey for three years prior and beat out 40 others interested in acquiring the location. What impressed Sun Oil Co., he said, was "when you came in here, you see how neat everything is ... . I had that mentality and philosophy back then."

Les said he always wanted to change people's perceptions about service stations. "Back then, mechanics were looked down on, and I wanted to raise that standard to a higher level at my own business, that people would see that this place was a professional place and not a grease pit, for lack of better words."

He also impressed upon his son that people drive by a lot of other service locations to come to Tri State Shell, "and you have to treat them a certain way because they chose to come here."

As a teenager Jeff said he didn't fully understand what that meant until he had to make other people's paychecks.

"That's when you have an appreciation, for when you have your own money that you have to spend and understand how hard it is to work for that money, how people have a choice to come here."

Jeff started hanging out at the service station at age eight or nine and got his first paycheck at 14. He worked in all areas of the business, starting part time, handling closing, doing clean-up.

"I know all aspects of this business because he's made me," Jeff said of his dad.

Although he grew up at Tri State Shell, Jeff didn't intend to make it his career. The family had a number of accountants on his mother's side, and Jeff planned to attend college for business. But he had a change of heart his senior year of high school and decided he would join the family concern.

But before his dad would hire him full time, he told him he needed to get his associate's degree. So Jeff went off to Johnson's College in Scranton, Pa., and got an associate's degree in automotive and combustion engines and technology.

Unlike many small businesses where the transition in ownership from father to son is sometimes difficult, that has not been the case at Tri State Shell. Early on, Jeff said he recognized his father's success as a businessman and felt he must know what he's doing. "So I had a very open mind taking instruction from him," he said.

The respect was mutual. Jeff said his dad never hid the finances, allowed him to do the books and to know what money was coming in and what money was going out. Les even shared his own income with his son.

"Even though my father was the boss and ultimately had the last say, he always allowed me to do what I wanted to do, to allow me to grow and not smother me, as long as it was within reason, and I wasn't going down a totally wrong road," Jeff said.

"That was something I started," he said. He and his wife got a puppy, and Jeff didn't want to leave it home alone. So he brought her to work so he could train her and let her out.

Today the facility has two resident dogs, Lady Bulova, a rottweiler owned by Jeff, and Sadie, a basset hound, which is Les'.

"People like it," Jeff said of the dogs. "The kids like it when they come in. ... A lot of people stop just to see them."

Les agreed, but added, "My big thing is if you are going to have a pet like that in your business, make sure everything is picked up and clean every day. You want to have a nice bed. You don't want dog hair all over the place. Then this is non-productive. You want the dogs to look good, present themselves good. We're professional; the dog's got to be professional, too."

Under his ownership, Jeff has expanded the towing business.

For many years, Tri State Shell had one truck, but Jeff saw towing as a way of bringing customers back to the dealership and as differentiator from big box-store competitors.

The company has four flatbed trucks and has two roadside assistance vehicles, one of which is equipped with wipers, batteries and tire repairs, etc.

Not surprisingly, keeping the trucks and equipment clean and the employees looking professional is a high priority.

"I press that on my guys. I want my trucks clean. I don't want fingerprints on the steering wheel. I make them wash their hands," Jeff said.

Much of Tri State Shell's marketing is word of mouth, but the company also promotes itself in various ways, including social media and eblasts.

Jeff has mixed feelings about Facebook and social media but does it because that's how certain people want to communicate about their vehicle.

He said he misses his older customers who have died because they tended to be customers for life. If they found a business trustworthy, they stayed loyal to it.

"Today, it's not like that," he said. "Kids today are raised just to go where it's the cheapest and nothing else matters."

Tri State also spreads the word through signage on its tow trucks. "They are like billboards all over the place," Jeff said.

But the most effective forms of advertising for Tri State Shell, he said, are the electronic billboard and 15-foot inflatable tire located beside the road in front of the facility. People remember the inflatable tire, Jeff said, which sends the message, "That guy sells tires. They tuck that away, and at least sometimes I get a shot to quote that individual."

As for the electric sign, it's located at the corner of a nearby intersection. So it has a captive audience each time drivers stop at the light.

Tri State Shell uses the sign not only to promote itself, but to provide community messages. "When (people) are stopped there, they are forced to look at the thing," Jeff said. "It's right in front of your face. They have no choice but to look at it."

Regarding tire sales, employees at the service station take time to get information from customers before selling them tires. They ask questions like how many miles do you put on your car every year, what is your budget, do you commute into the city every day. Only then can the dealership comfortably give them a few options.

An example of this involves newer vehicles, many of which come equipped with tires with soft rubber compounds that tend to wear quicker. Owners of these vehicles often don't understand why their tires are worn out at only 19,000 miles, Les said, adding that selling them, for example, a $200 tire doesn't necessarily mean that the tire will last any longer than if they spent $100 on a tire.

Whether Tri State Shell gets the sale is irrelevant, he said. "The fact is I want that person to feel special. That we did our best to inform them and hopefully through that we get the sale."

That seems to be the overriding aim at Tri State Shell.

"Everything we do isn't always about the bottom line of making money," Les said.

"It's the fact that when people really appreciate the effort we've made over the years, that knowing that when they come here, they will leave a little happier than when they came in, because it was a fun place to stop. They've seen unique things. And that's fun."