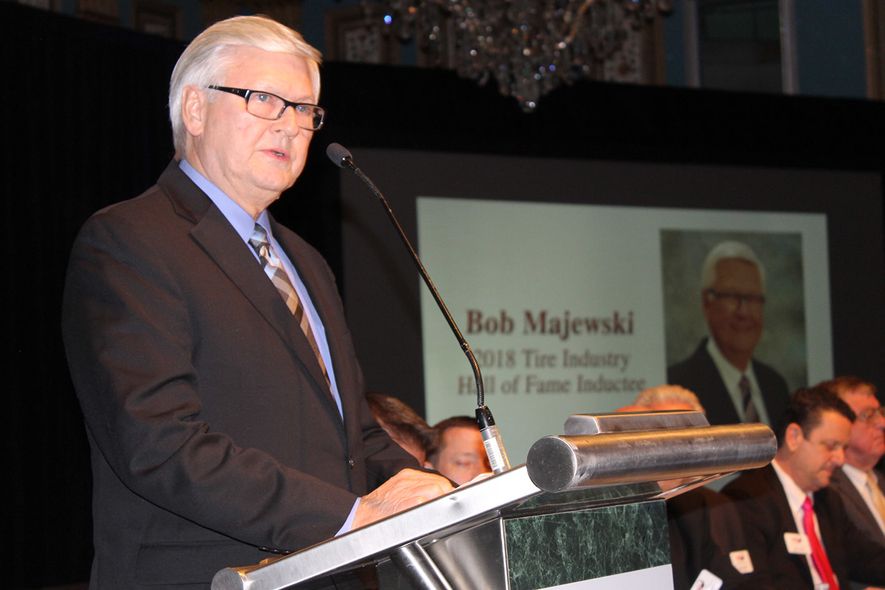 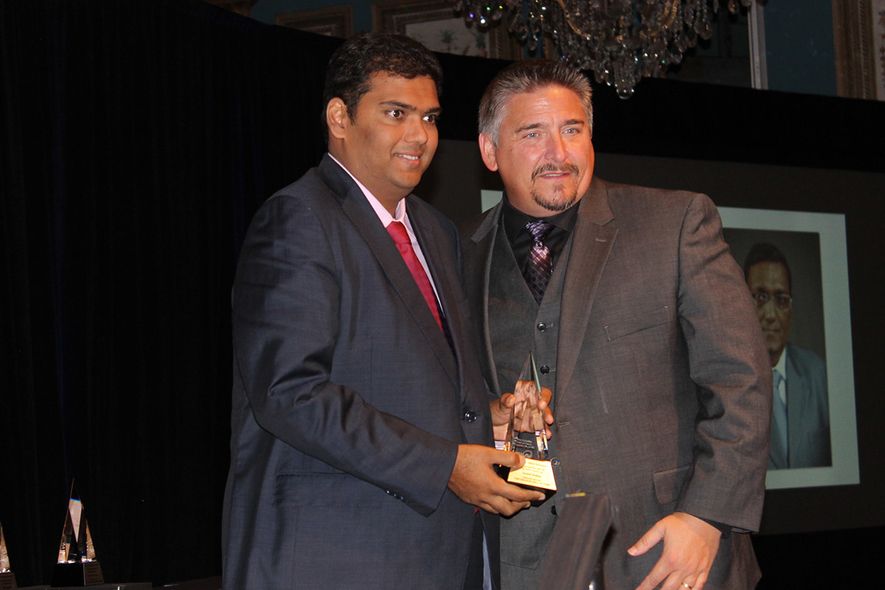 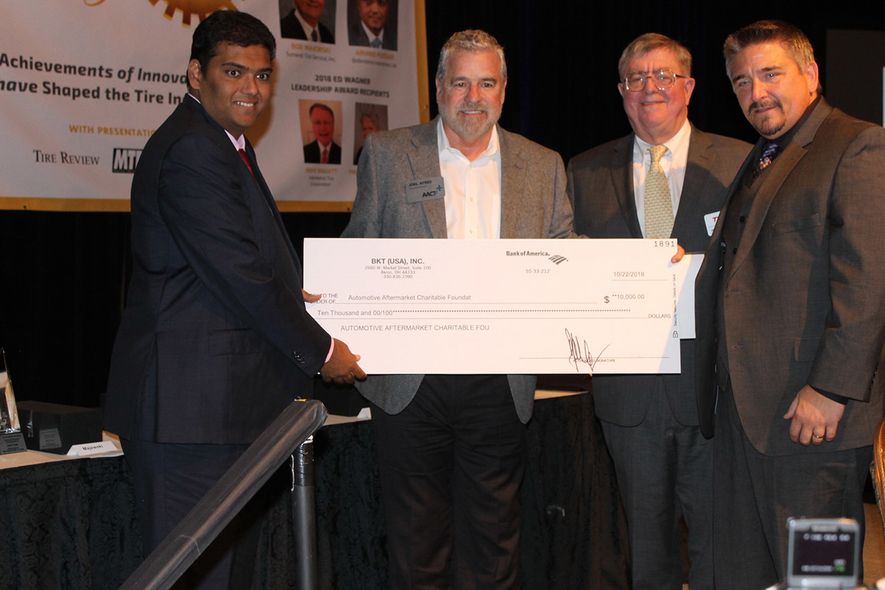 On behalf of BKT, Rajesh Poddar (left) presents a $10,000 check to the Automotive Aftermarket Charitable Foundation. Helping with the presentation are (from right) John Evankovich and Roy Littlefield
Share 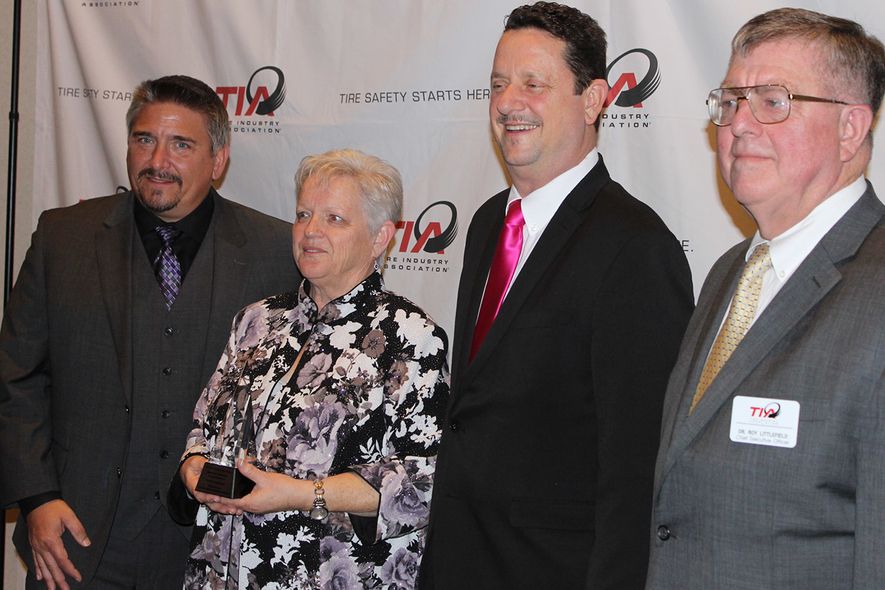 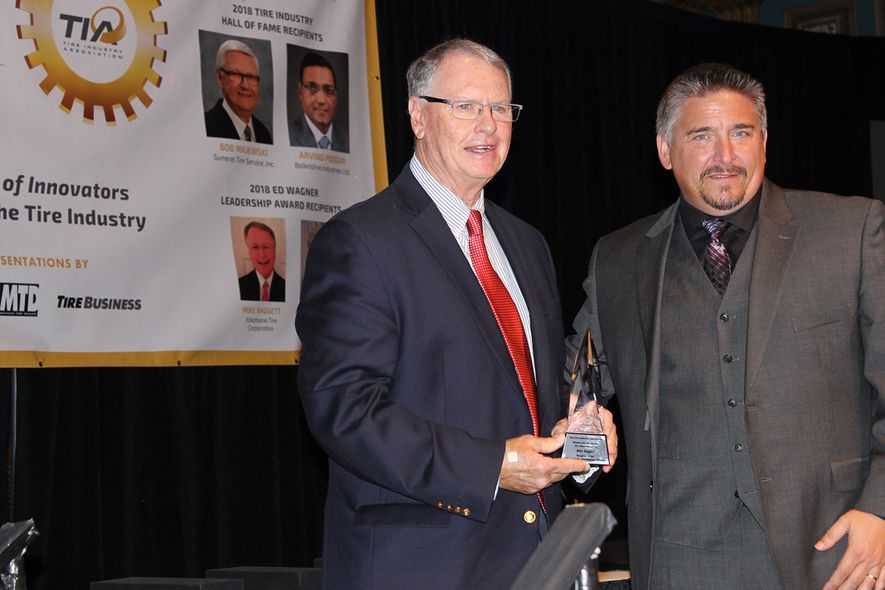 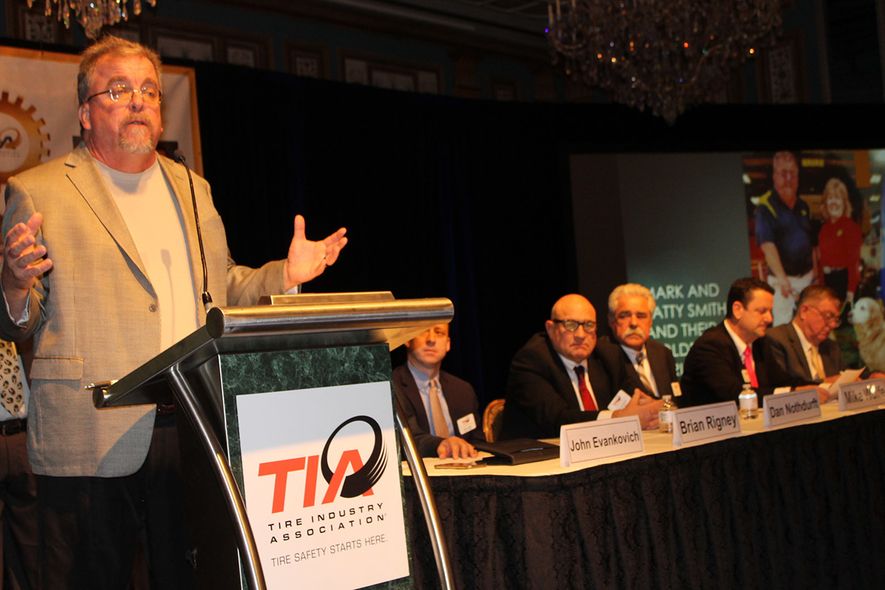 The Hall of Fame Award is TIA's highest honor, which recognizes individuals who have made a significant impact within the tire, rubber and transportation industries. The Ed Wagner Leadership Award is presented to individuals or companies that demonstrate leadership or innovation in products and services that foster and promote the tire, retreading and/or tire recycling industries.

• Mr. Majewski has been involved in the retread business for more than 50 years, first working at a retread plant for a family-owned business and then working for Mohawk Rubber, Hercules Tire and the former American Retreaders' Association (ARA), where he worked to establish retread training.

In 1994, Mr. Majewski became part owner and vice president of Sumerel Tire Service in Newport, Ky., responsible for the manufacturing, operations and marketing of the Acutread Segmented Mold Cure Process, which he designed.

In 2002, he became president of Sumerel Tire, a position he held for 13 years. He has formed a steering committee that runs Sumerel Tire's planning for the next transition.

• Mr. Poddar began his career at BKT in 2000 where he sought to take his family's company forward and make it profitable. He decided to enter the OTR tire market with a vision to make BKT a global player. With more than 93 percent of its tire production targeted for export to more than 130 countries, BKT has experienced growth in terms of revenue and profits.

BKT now claims a 6-percent share of the world OTR market, with annual sales of close to $1 billion.

• Ms. Pratt-Boyer began her career in the tire industry over 45 years ago with Purcell Tire, working managerial positions in retail, commercial, retreading and wholesale. She has served as operations manager, region manager and now as senior auditor for Purcell.

Ms. Pratt-Boyer is a former member of the TIA board of directors and was the second woman to serve as board president.

• Mr. Baggett has owned an OTR dealership and worked for several tire companies, including Bridgestone Americas, Michelin (TCI), Cobre Tire and Yokohama, where he retired in 2017.

He worked on the development of one of the first OTR tracking systems, and a second one while working for Yokohama. He has been involved in the OTR retread business both as owner of Southern Tire and as an executive with Bridgestone and Cobre Tire.