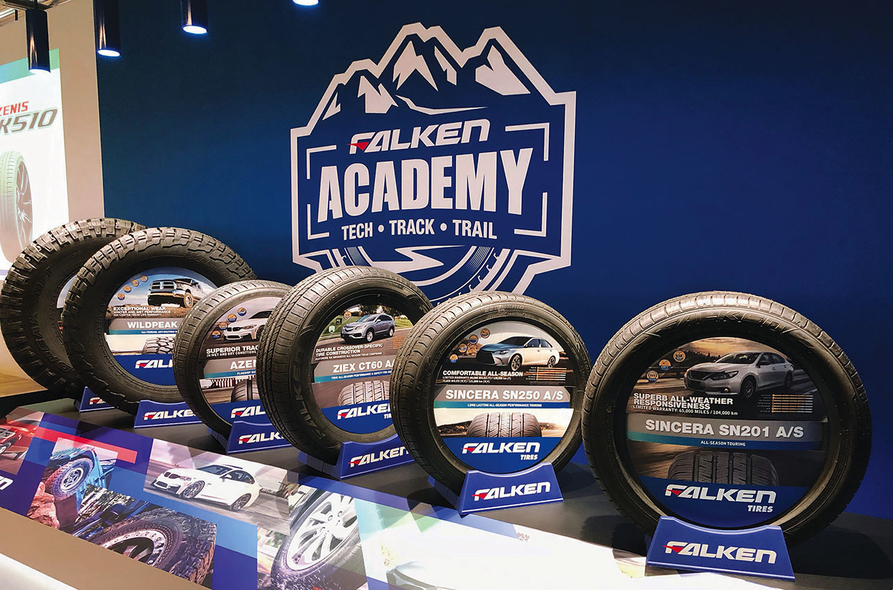 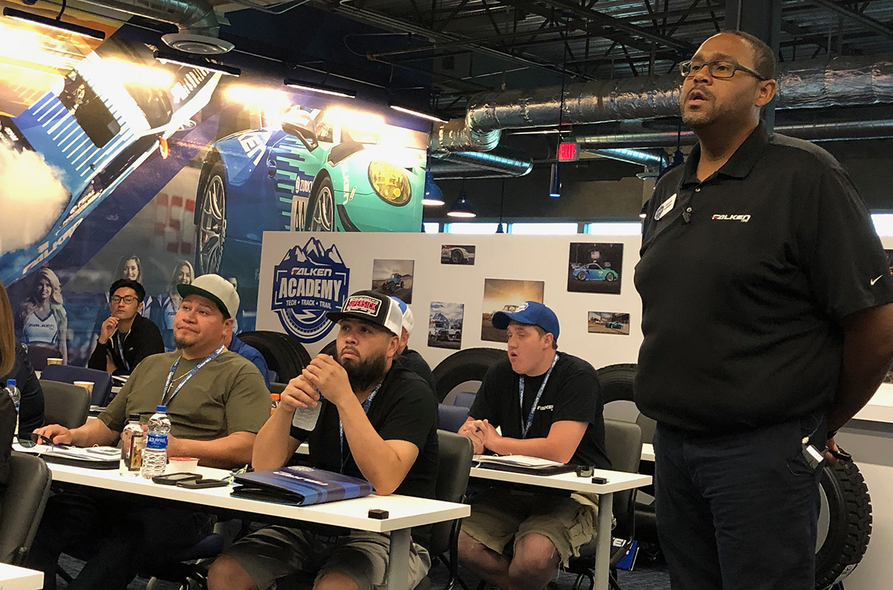 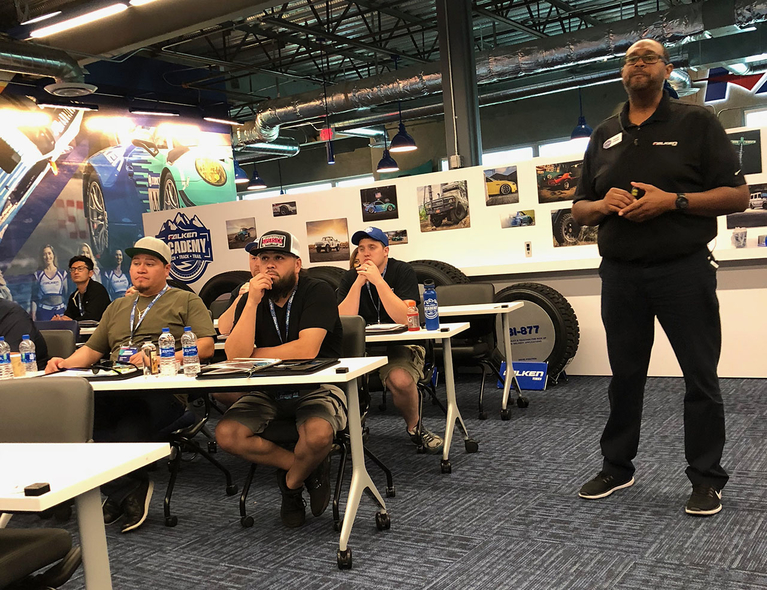 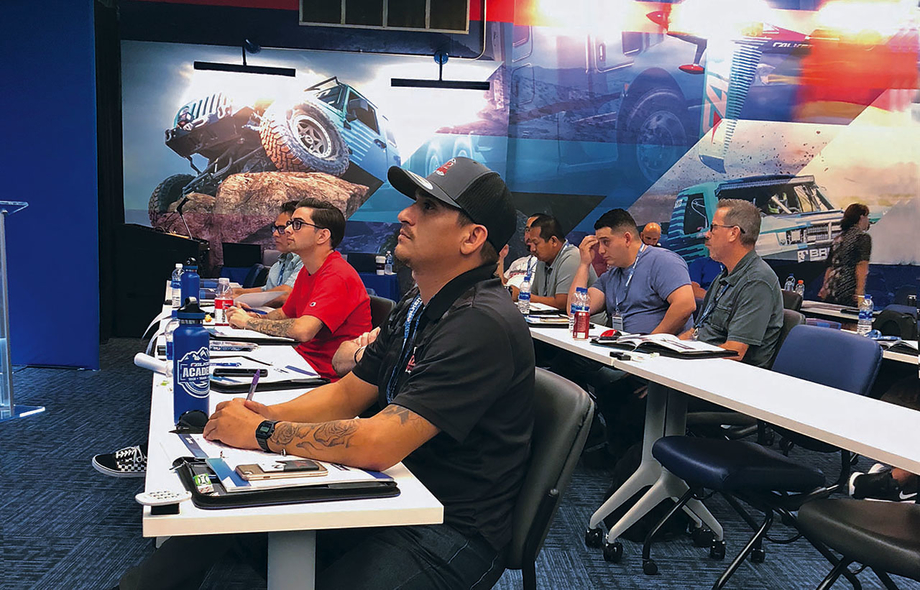 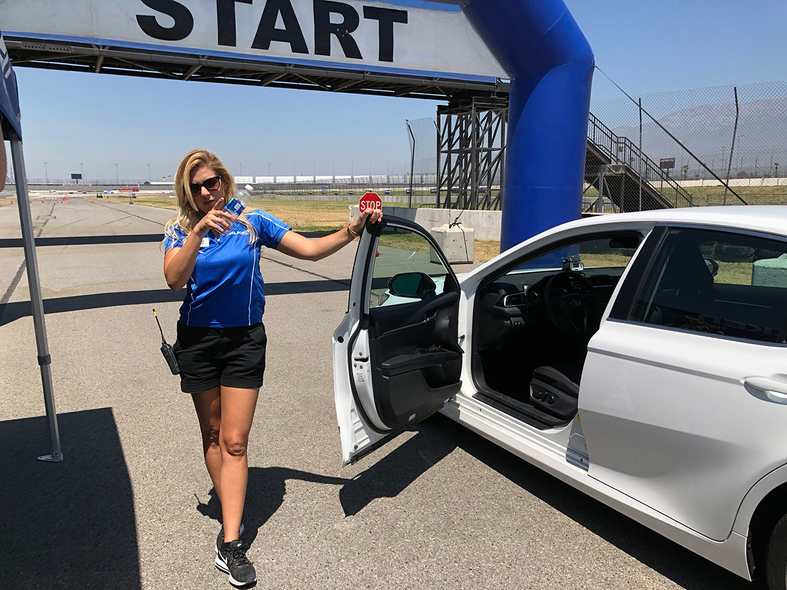 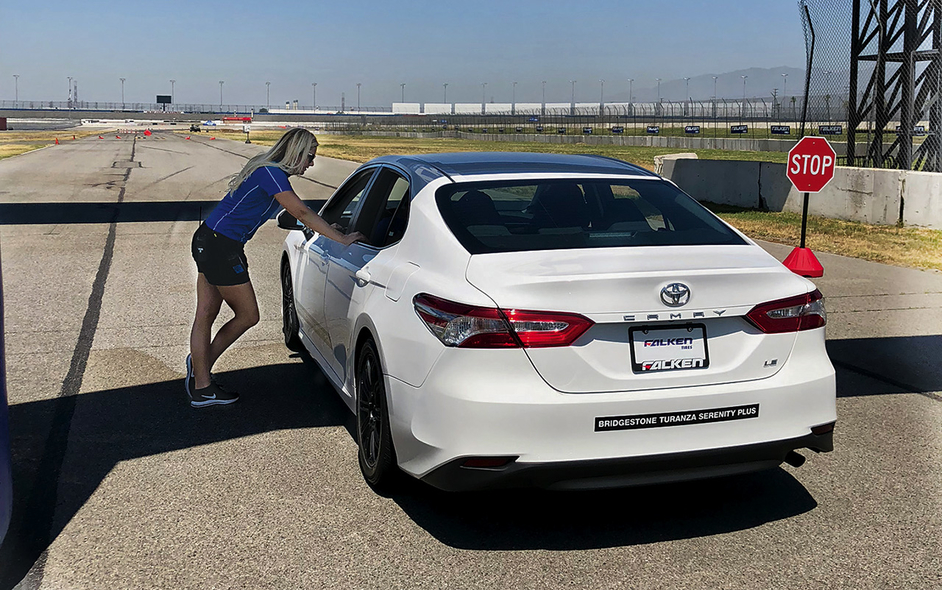 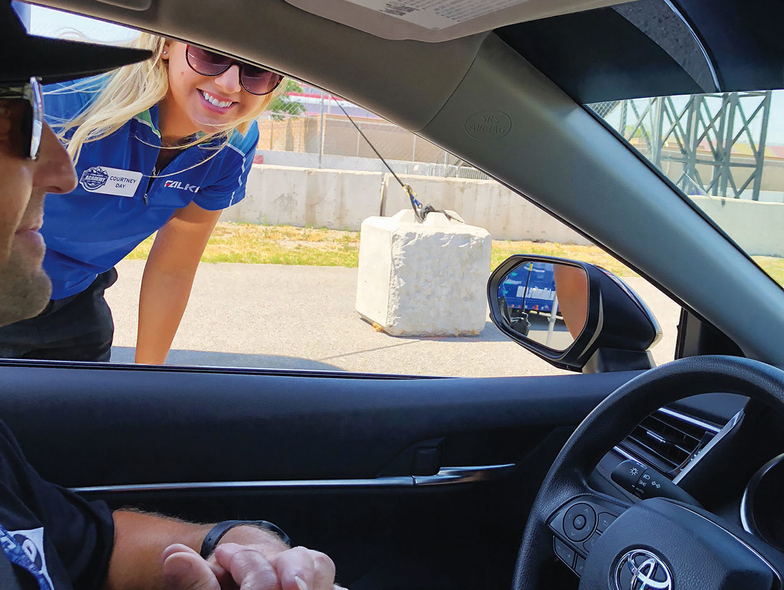 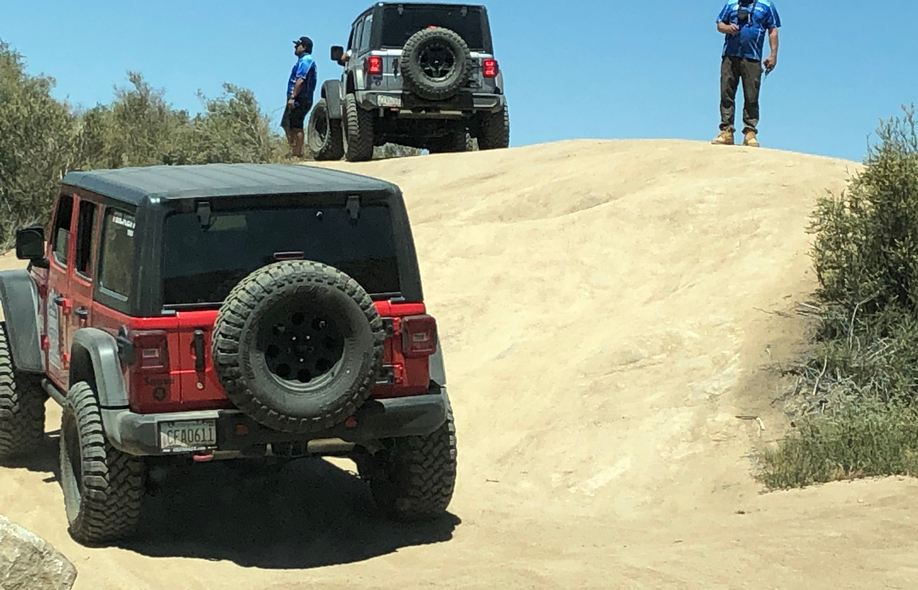 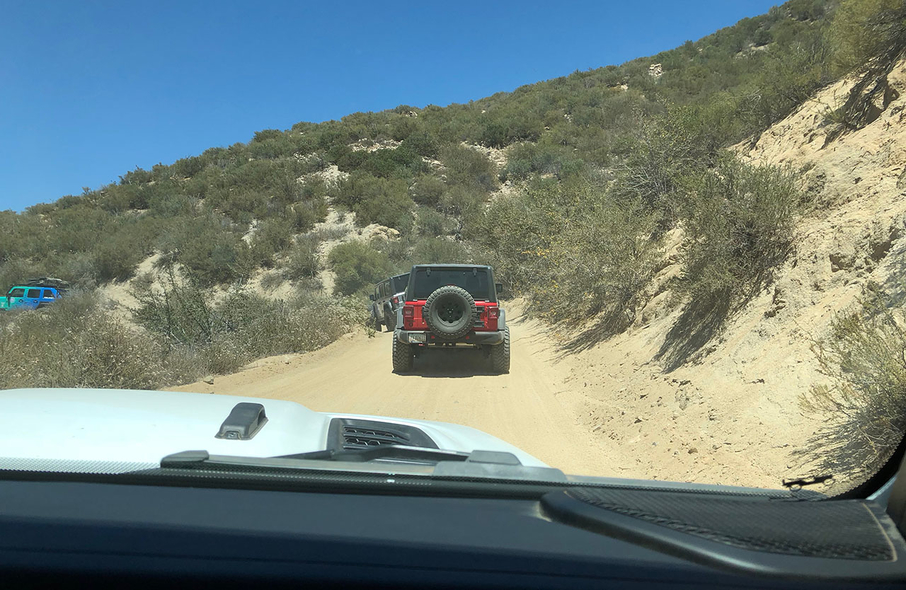 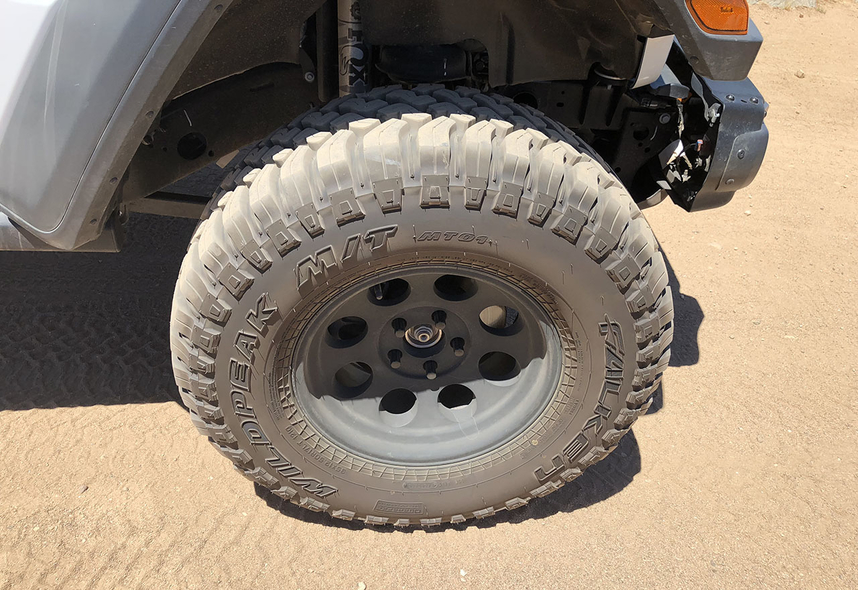 The Wildpeak is a little dusty from a day on the course.
Share

The Wildpeak tread is a little dusty after a day on the off-road course.
Share 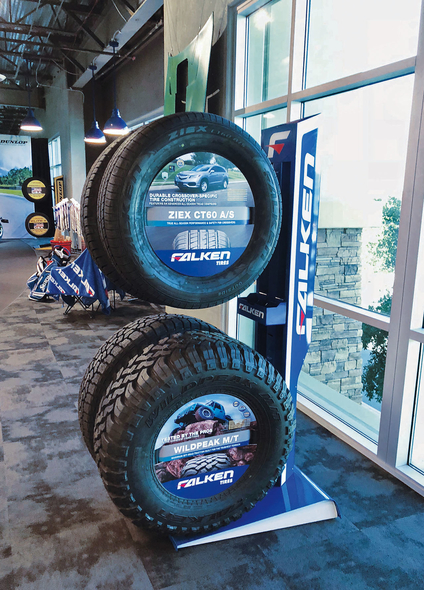 Falken's consumer tires are on display at company headquarters.
Share 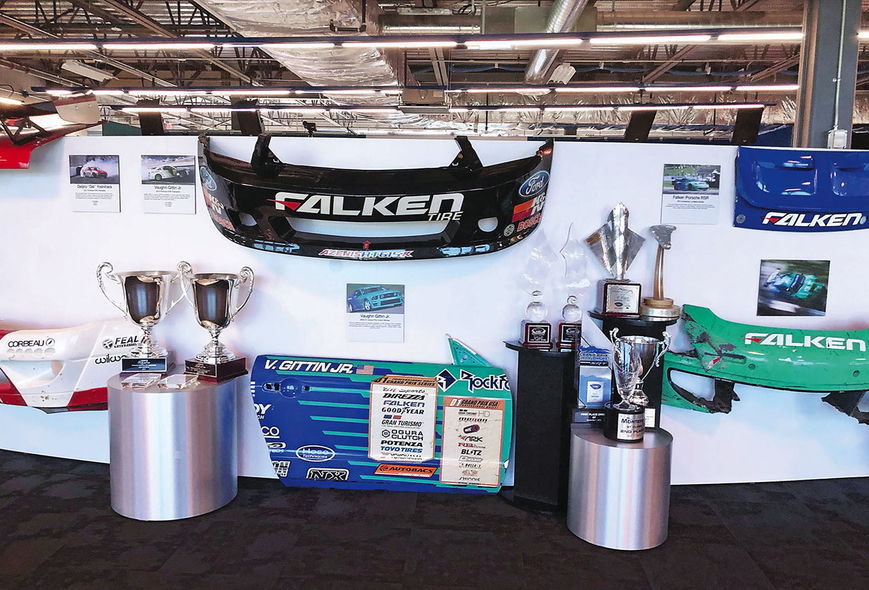 Trophies and other memorabilia are featured at SRNA headquarters.
Share 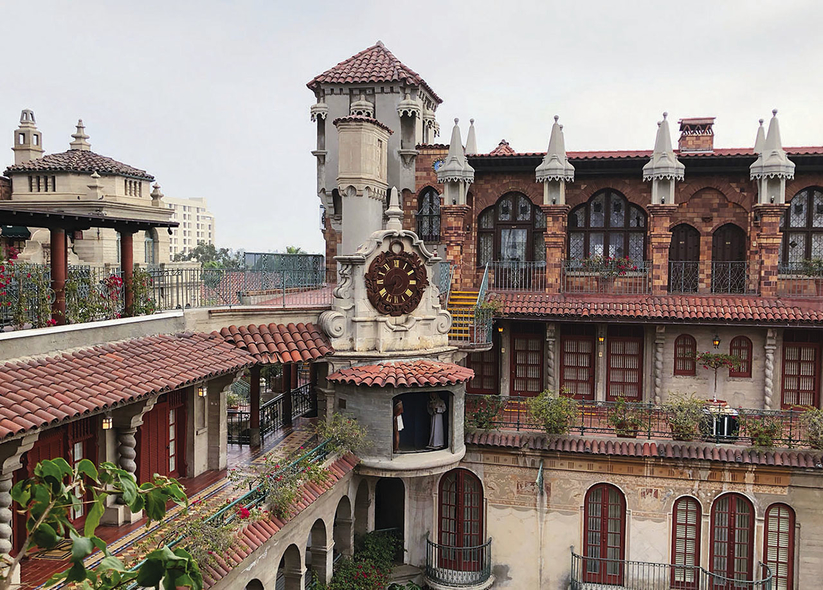 A look at the ornate Mission Inn Hotel & Spa in Riverside, Calif.
Share 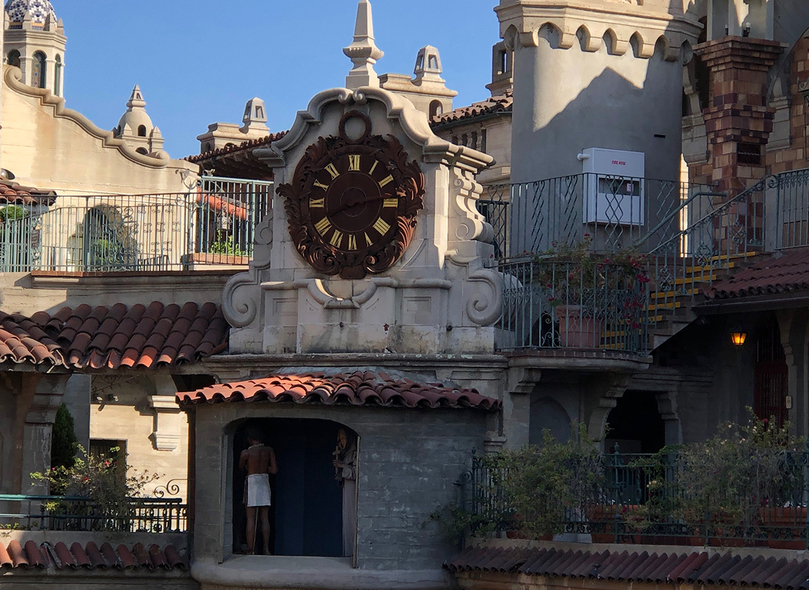 A look at the ornate Mission Inn Hotel & Spa in Riverside, Calif. Tire dealers stay at the historic hotel while attending the Falken Academy.

RANCHO CUCAMONGA, Calif. — Sumitomo Rubber North America Inc.'s (SRNA) Falken brand is on a mission: Build relations with its network of dealers across North America, while at the same time educating them about the brand's burgeoning portfolio.

Oh, and have some fun, too.

A host of Falken personnel has spent several weeks over the last six-plus months launching the Falken Academy, a two-day seminar and ride-and-drive held in Southern California for dealers and other Falken stakeholders.

Dealers spend one day in a classroom learning about all things Falken at SRNA's U.S. headquarters in Rancho Cucamongo, then they spend the next day putting some of Falken's most popular tires to the test.

During Day Two, guests spend part of the day at Auto Club Speedway in Fontana, Calif., testing Falken tires against competitors on a wet-braking course, on an autocross course and on a modified street course, then they spend the other half of the day in a Jeep equipped with Falken's Wildpeak off-road tires, traversing through the Cleghorn Trail near San Bernardino, Calif.

Dealers are housed at an eclectic hotel in Riverside, Calif., called, appropriately enough, the Mission Inn Hotel & Spa — a National Historic Landmark since 1977 that began as a modest hotel in 1876.

Today, the Mission Inn serves not only as a throwback to the opulence of California's past, but also as a museum for some of the most unusual artifacts ever displayed, including exotic artwork, furniture and religious relics.

Among the treasures on display are portraits of U. S. presidents who have stayed there; an 18-karat gold Rayas Altarpiece from the mid-18th century that was commissioned for a home in Mexico; the Nanjing Bell, reputedly the oldest bell in Christendom, dating to 1247; and an 8-foot Buddha that the hotel claims was made in Japan between 1615-1868.

Tucked in a courtyard is the Fliers Wall, which features copper wings honoring noted fliers who visited the inn, including ones from Charles Lindberg, Amelia Earhart, Chuck Yeager, John Glenn and Buzz Aldrin.

Falken reallocated some of the capital it spent in 2015 and 2016 to become the Official Tire of Major League Baseball (MLB) to sponsor the Falken Academy.

"While the MLB sponsorship was successful in promoting brand awareness to consumers, Falken decided to target its focus directly to the dealers, who are critical in helping consumers to make their buying decision," a Falken spokesman said.

"Falken Academy is a direct representation of Falken dedicating its marketing resources to its dealers, providing them with an invaluable experience with its products as well as an abundance of information to equip the dealers with the ability to sell Falken products with knowledge and confidence."

Between 40 and 60 dealers attend each session — held over two-week stretches. The first session was held Feb. 19, with others held in June, August and September. Once the year's final session concludes in September, Falken will have hosted around 1,500 dealers, all of whom qualified to participate through the Fanatic Dealer Program.

Every dealer who participates in the Falken Academy this year will be entered to win a Ram 1500 4x4 pickup equipped with the Falken Wildpeak A/T3WA tires.

Several dealers who attended one of the sessions in the summer offered a singular message for Falken: Mission accomplished.

"This helps a lot because I can use my experience with Falken and share with customers and help them make a decision on how they want to proceed on a tire," Avery Austin, owner of Austin's Auto Advantage, a nine-bay shop in Safford, Ariz., said. "Normally, if I trust a tire, they're going trust a tire."

"I get to take back and talk about the progress that Falken has made and all the positive changes that have happened," said Dennis Hernandez, co-owner of AZ Tire Shop, a six-bay shop in Peoria, Ariz. "I can take that back to the customer as a retailer to help make a better decision for them."

Mr. Hernandez said his primary concern is servicing his customers, especially getting the right tire for their specific need.

"And being here aids in that belief," Mr. Hernandez's brother and business partner, Richard Hernandez, added.

"It's extremely important to have that touch, that feel," Richard Hernandez said. "You have to have experience it. You can't go online and see a description without a picture. You don't understand it or anything about it."

Dealers get the opportunity to see plenty of pictures — as well as review plenty of facts — about parent company Sumitomo Rubber Industries Ltd., SRNA and its Falken brand during the day-long classroom instruction.

During one session that Tire Business attended, Bakari Howard, corporate training supervisor for Falken, revealed some intriguing information, including:

Sumitomo Rubber Industries is the oldest tire manufacturer in Japan;

It offers Dunlop (in Asia, Africa, South America and to certain OE accounts in the U.S.), Falken, Ohtsu, Sumitomo and other private brands;

It is the patent holder of all indirect TPMS systems worldwide;

Falken Tire has more than 8.8 million followers on social media, with 30 percent of that total in the U.S., gaining 14.5 followers every second.

Mr. Howard told dealers that in 2012, when the company opened its North American headquarters in Rancho Cucamongo, Falken established its core principles: Profitability; easy to do business with; competitive fill rates, and compelling products.

"These are the four cornerstones of the company," Mr. Howard said.

A significant portion of classroom time was used to review the Falken portfolio as well as its positioning in the market.

Falken also revealed plans to release the Wildpeak H/T HT02, a rugged, highway all-season true light truck tire that will launch in the first quarter of 2019. The product replaces the Wildpeak H/T HT01 in the Falken lineup, and the majority of the line (30 of 38 sizes) will be manufactured at Falken's North American facility in Tonawanda, N.Y., near Buffalo. The plan is to move production of the entire line to Tonawanda.

Mr. Howard also discussed Falken Digital TV, the brand's digital television feed that is available to the network of 4,000 Falken dealers. The broadcast, which debuted in April, includes product overviews and training as well as general auto-related shows and news for dealer personnel and retail consumers.

Dealers can stream fresh content into their shops and waiting areas daily through a TV's HDMI port or by connecting to WiFi, without any subscription or programming fees.

"This initiative is designed to educate our retailers as well as their customers on Falken products, while entertaining them with a variety of automotive-focused programming from open to close of business," said Nick Fousekis, Falken's director, advertising and promotions, said.

The studio for Falken Digital TV sits adjacent to the classroom setup at SRNA's.

The first day concluded with a review of the Falken Fanatic program, its 2018 payout structure as well as what rewards are available.

Day Two is quite different. One half of the day includes driving on three distinct tracks set up at Auto Club Speedway.

In the wet-braking exercises, drivers test the Falken Ziex CT60 A/S against the Michelin Premier LTX and the Hankook Dynapro HP2.

Sedans with Falken's Azenis FK510 are used in the autocross portion, tested against the Pirelli Cinturato P7 and the Sailun Atrezzo,

Dealers spend the other half of the day taking an hour-long bus ride to the Cleghorn Ridge Trail in the San Bernardino National Forest. There, they spend three-plus hours testing their driving ability — as well as the Wildpeak A/T 3W and Wildpeak M/T — while enjoying the picturesque scenery and withstanding the fierce Southern California desert heat and sun.

The dealers who spoke to Tire Business are sold on the Falken product.

"Honestly it's a quality tire at an affordable price," Mr. Austin said. "You can get other stuff...they'll compete with it, but apples to apples, Falken will do the same job as the more expensive tire. And it holds up.

"The reason why I kind of push Falken and sell them is I don't have to deal with the backside headache on them," he added. "Some (tires) come back because they wear funny or premature. (Falken tires) hold up good. To sum it up, Falken is the best bang for the buck."

The Hernandez brothers said they believe Falken has improved its reputation substantially with its most recent lineup of products.

"Since we've first started, we have seen them as an entry-level tire, something that wasn't a common or known tire, and as they've evolved, even up to the last couple of years, they didn't have a really good tire," Dennis Hernandez said. "Now it seems like they're pretty steady and pretty good across the board on their lines."

The brothers installed a set of Falken Wildpeak A/T 3Ws on their 2016 Ram Sport truck to test the tires firsthand.

"We were looking for something that was super, most aggressive looking, yet still get a quality tire, but I was blown away how good it was," Dennis Hernandez said. "We were trying to look for the most for the least amount, and we found that with Falken.

"When you introduce the name Falken, you have to re-educate customers," he said, "Let them know that Falken has revamped everything.

"This is my review based on what we put on our vehicle.... It's a building-trust stage. And so far it's been great. As long as they build a quality tire, we'll continue to push their products."

Dennis Hernandez said customers often come into their tire shop looking for a tire that is smooth, quiet, reliable, dependable and "something that looks cool.

"For the majority of our customers, it has to have that cool factor," he said. "That's one of the main factors. Then we just base it off there. And when I tell (customers) the price between Falken and some of the competitors, they say, 'Let me try Falkens.' "

Falken said hundreds of dealers have responded "positively to the experience they have had touring the Falken Tires headquarters, gaining in-depth product and company knowledge and, of course, experiencing Falken products being put to the test."

Officials at the brand, said they expect to continue the program in 2019.

According to the spokesman, the mission is a work in progress.

"Falken continues to fine-tune the program as its staff learns what works best to make it a memorable experience."