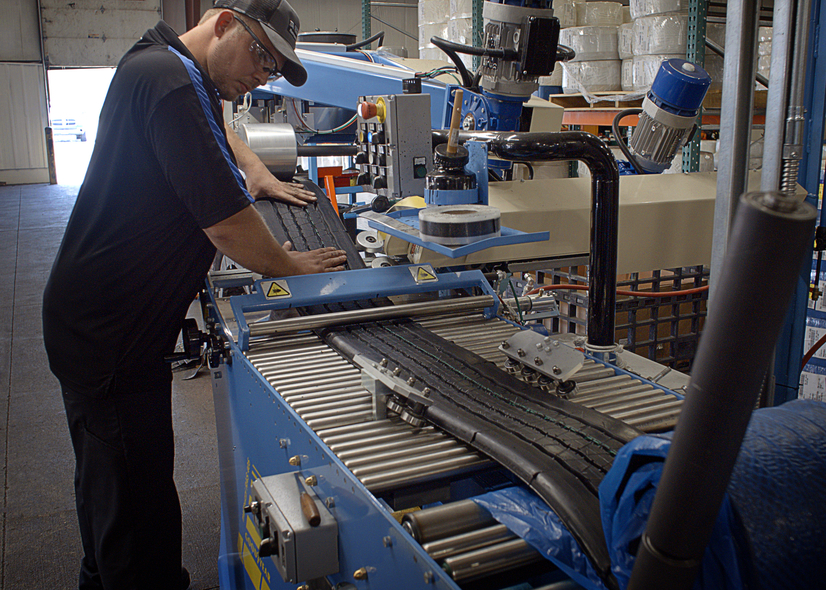 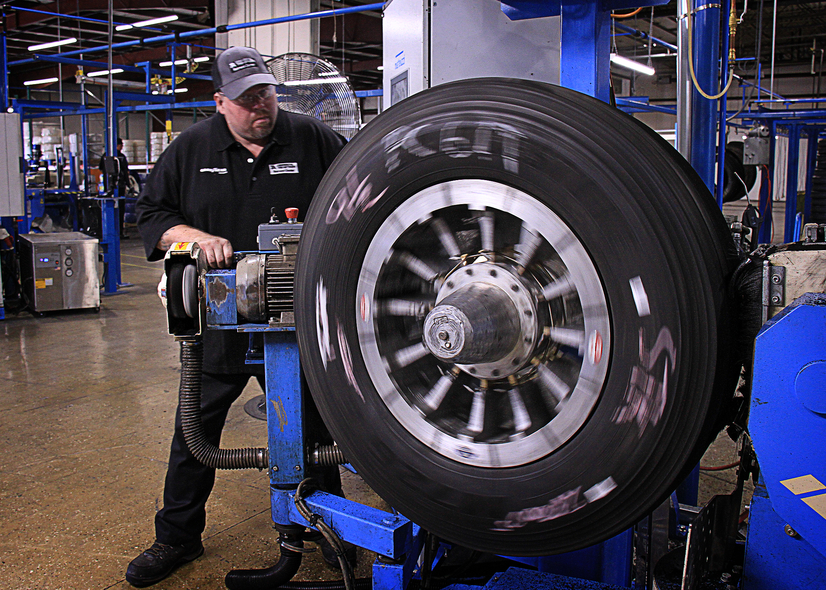 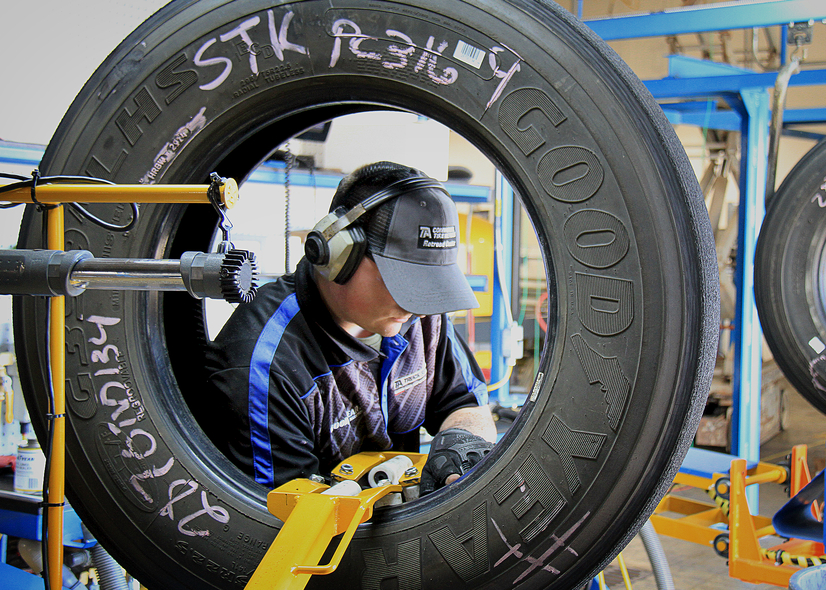 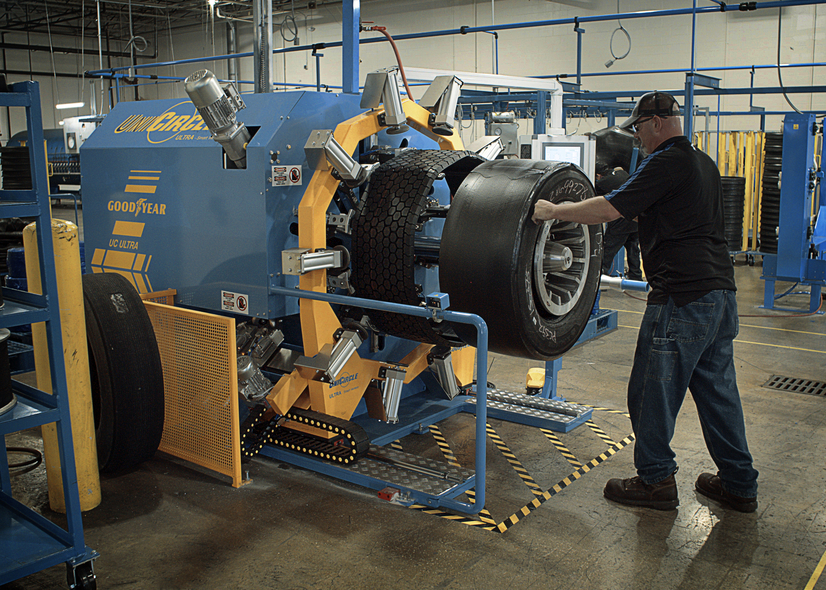 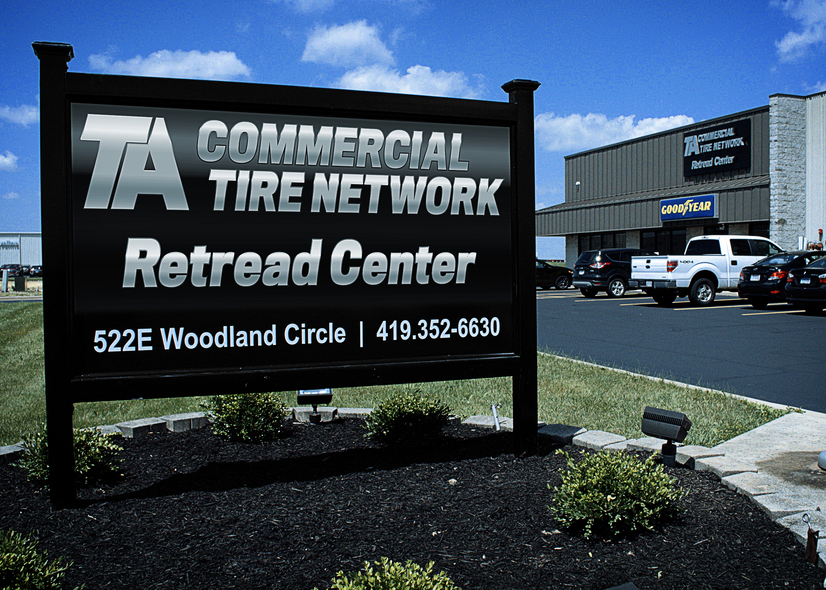 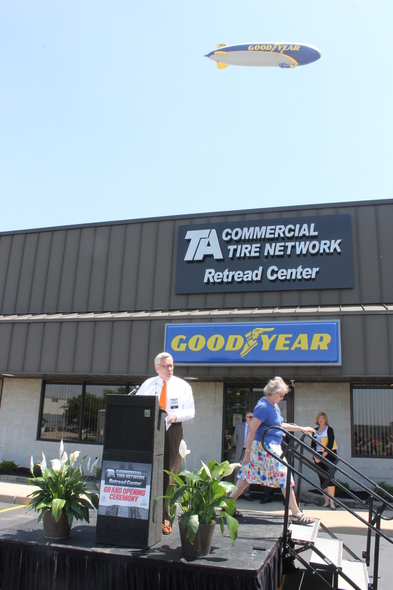 The Goodyear Blimp flies overhead during the ribbon-cutting ceremony.
Share 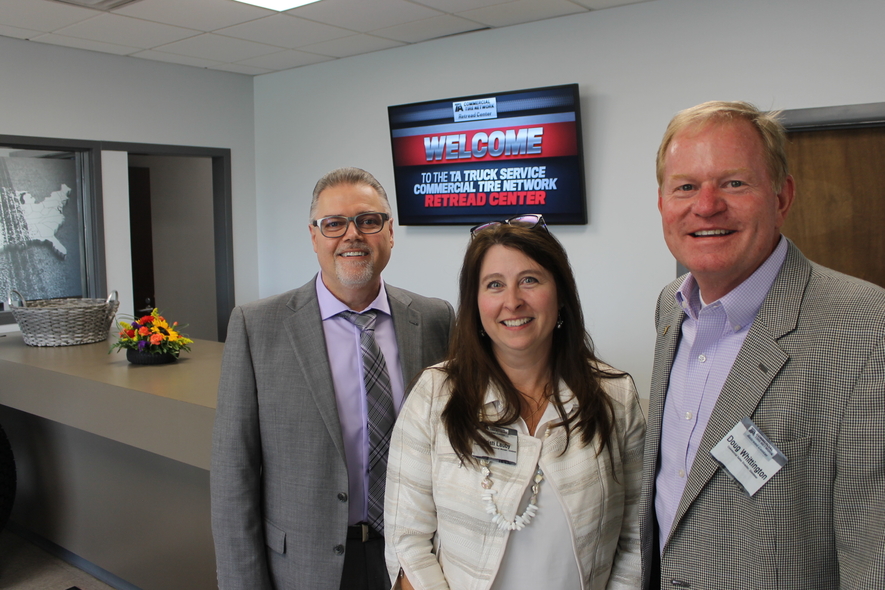 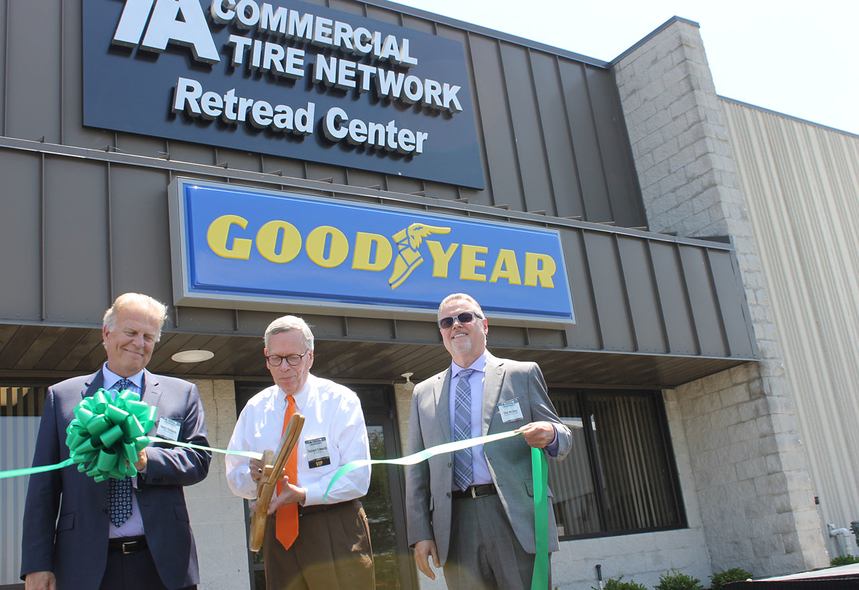 BOWLING GREEN, Ohio — TravelCenters of America L.L.C. (TA) has started production at its first retread plant, a Goodyear system facility in Bowling Green that will serve as a test bed for TA to monitor as it considers expanding retreading as part of its business model.

The 32,000-sq.-ft. plant, a renovated facility that has housed two other retreaders over the past several years, opens with a staff of 15 working a five-day, one-shift schedule capable of producing 115 tires per day initially, TA officials said the plant's ceremonial opening.

The facility, located in the Woodbridge Business Park east of I-75 and of Bowling Green proper, also has a 20,000-sq-ft. warehouse on site and will offer new tire sales, tire inspection/repair and emergency roadside call services as well.

TA paid about $2.7 million to buy the plant and property — which had been idle since late 2017 — and earmarked an additional $2.9 million for renovations and new equipment, including a shearography casing inspection system and building equipment for Goodyear's Unicircle spliceless retreading process. The plant also has capacity for wide-base single tires, considered a premium product that only a few retreaders can offer, TA said.

TA and local government officials — including TA President and CEO Barry Richards and Bowling Green Mayor Robert Edwards — were on hand July 12 under blue skies and the Goodyear Blimp to cut the ribbon on the plant.

The plant initially will supply TA truck/travel stops and other Goodyear customers within a 150-mile radius, an area that includes approximately 45 TA travel stops, according to Greg Frary, vice president truck service for Westlake, Ohio-based TA. That service area could expand as production expands, he added, noting that the plant is one of just a handful of independently operated Unicircle plants nationwide.

TA is considering options for adding more captive retreading capacity, Skip McGary, executive vice president, commercial operations, said, but doesn't intend to do so until it has had an opportunity to evaluate how well the Bowling Green operation pans out.

In the meantime, TA sources retreads from other local producers across the country for its 244 truck service facilities.

Having a valued customer such as TA opt to have its first retread plant aligned with Goodyear is a bonus for the tire maker, Mr. Whittington said, since Goodyear hasn't had a quality, full-service retreading partner in northwest Ohio for a long time.

The new plant sources casing both from the TA shop network as well as from fleet customers in the area, according to Jody Miller, the plant manager who managed the plant in 2016-17 under the ownership of Ironhead Technologies Ltd. and has 20-plus years' experience in the Bandag system.

TA was able to hire back nearly all of those who worked at the plant under Ironhead's ownership, Mr. Miller said. All told, the new staff collectively has more than 150 years of experience in retreading.

The facility opened originally as a retread plant in 2005 as Wood County Bandag, according to Wood County, Ohio, property records.