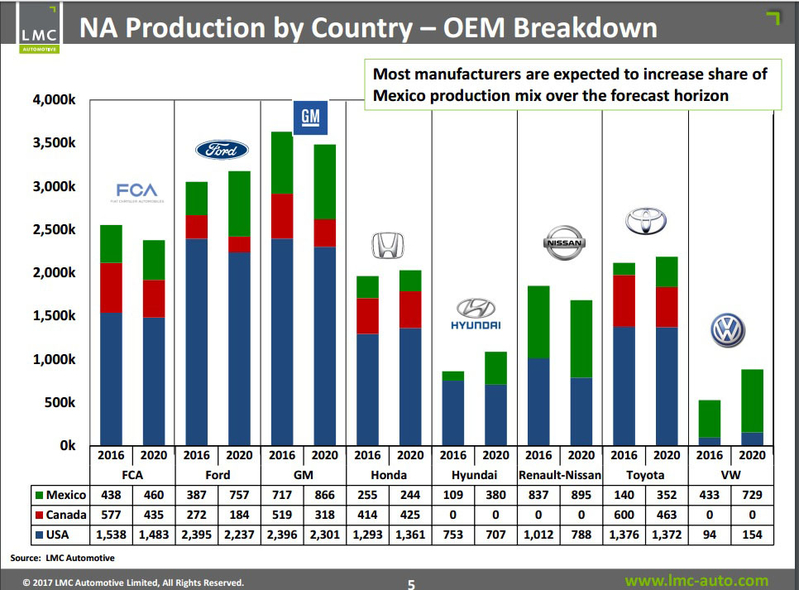 The study, released Jan. 18, said production south of the border for Detroit's three auto makers will increase through 2020, while production in both Canada and the U.S. is expected to fall.

The percentage of Mexico-built vehicles sold in the U.S. is predicted to rise, too, the study said, as capacity investment in Mexico will grow at a much faster rate than in the U.S.

"The U.S. currently accounts for two-thirds of North American vehicle production, but significant investment plans and decisions to re-source capacity from Asia and Europe to Mexico are expected to bring Mexican production from 19 percent of NAFTA today to 26 percent in 2020," the study said.

"The potential for penalty on vehicles manufactured within NAFTA but outside the U.S. may impact existing vehicle sourcing and future [North America] production mix and vehicle decisions, many of which are already in process," the study said.

"Until specific policy is detailed, the environment is fluid and uncertainty remains high, as the industry plans for the future. Aversion to policy risk, and to the threat of negative publicity, has become a significant consideration for planners."

LMC expects overall U.S. vehicle sales to plateau around the 17.5 million mark through the end of the decade, and as a result, it said the number of vehicles sourced within North America will increase. More than 50 percent of that increase is expected to be in Mexico.

Among the Detroit 3, Ford Motor Co.'s Mexico production will increase the most (to 757,000 vehicles in 2020 from 387,000 this year) over the next four years, thanks in large part to shifting production of the Focus compact sedan from its Michigan Assembly Plant to Hermosillo, LMC predicted.

The percent of Mexico-built vehicles for sale in the U.S. will grow for nearly all auto makers, LMC said.

The lone exception: FCA. The auto maker's Mexico sourcing will decline as it re-sources vehicles both inside and outside the NAFTA zone, LMC said, although Mexico-built vehicles will still account for 10 percent of its U.S. sales mix.

The study expects North American production capacity will increase by 3 million units through 2023, and nearly half of that growth will come in Mexico.

It says production capacity investment in Mexico will rise 47 percent. Investment in the U.S. will increase 12 percent, while Canada investment will fall 4 percent over that same stretch of time.

The findings come despite recent announcements by Ford, GM, FCA, Hyundai and others about investing in the U.S., and in some cases relocating production back to the U.S.

"This appears to be the direct result of pressure from Trump holding to his campaign promise of penalizing companies for manufacturing outside the U.S. However, many of these decisions were already planned or were altered due to other factors, such as lower demand for small vehicles or shifting higher margin or complex vehicles to the US, and not solely the result of the pressure."

Michael Martinez is a reporter with Automotive News, a Detroit-based sister publication of Tire Business.